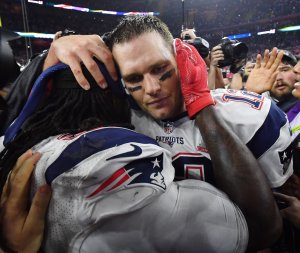 NFL // 3 years ago
Fantasy Football Who's In, Who's Out: Week 16 NFL injury report
The status of running backs is making headlines this week as crucial Week 16 games approach with playoff spots and positioning on the line.

NFL // 3 years ago
Struggling Lions will take winning ugly
Detroit's 17-3 win over the Arizona Cardinals on Sunday in Glendale, Ariz., was not pretty but it was a win just the same for the Lions.

NFL // 3 years ago
First-year coaches square off as Cardinals host Lions
It has not been an easy season for a pair of first-year head coaches who will be on opposing sidelines when the Arizona Cardinals host the Detroit Lions on Sunday afternoon.

NFL // 3 years ago
Eagles surprisingly rely on Josh Adams to power ground game
It looks like Doug Pederson is playing favorites now, and his favorite running back is Josh Adams, the undrafted rookie free agent from Notre Dame.

NFL // 3 years ago
Eddie Jackson comes up big for Bears in win over Lions
Without injured quarterback Mitchell Trubisky, the Chicago Bears' offense needed assistance for point production against the Detroit Lions.

LeGarrette Montez Blount (born December 5, 1986) is an American football running back in his senior year at the University of Oregon. He rushed for over 1,000 yards in each of his two seasons in junior college. He then committed to the Oregon Ducks football program as a junior, for the 2008 season. That year, he ran for over 1,000 yards and scored a school record 17 touchdowns, but he was suspended indefinitely after the conclusion of the season. He was reinstated for the 2009 season by incoming coach Chip Kelly. In spite of the suspension, he was regarded as one of the best running back prospects of his class, and drew comparisons to Michael Bush.

After the opening game of the 2009 season, Blount was suspended again, this time for the remainder of the 2009 season. Kelly issued this suspension after Blount punched an opponent and angrily confronted fans immediately after the nationally televised season-opening loss.

Blount was born December 5, 1986 in Madison, Florida, to Gary and Barbara Blount. He has one brother and one sister. He attended Taylor County High School in Perry, Florida, where he was a four-year starter and three-time 1,000-yard rusher. He accorded second-team all-state player honors as a prep senior.

FULL ARTICLE AT WIKIPEDIA.ORG
This article is licensed under the GNU Free Documentation License.
It uses material from the Wikipedia article "LeGarrette Blount."