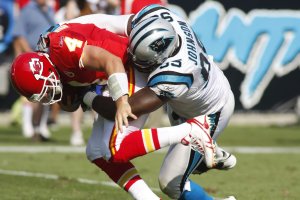 NFL // 2 years ago
Darnold, Bridgewater shine in Jets' preseason opener
The New York Jets suddenly have a nice problem on their hands.

I feel pretty good. It was definitely a different situation this year, knowing that I wasn't gong to be with the team. I was hoping the situation would work out

If you put all the new anti-idiotarian Web logs end to end, they would stretch halfway around Michael Moore's belly

FULL ARTICLE AT WIKIPEDIA.ORG
This article is licensed under the GNU Free Documentation License.
It uses material from the Wikipedia article "Charles Johnson."
Back to Article
/