Feb. 14 (UPI) -- Jordan Clarkson is fitting in just fine with the Cleveland Cavaliers. He showed what he can bring with his quick handles in a win against the Oklahoma City Thunder.

He also poured in 14 points, had four assists and three rebounds in the Cavaliers' 120-112 victory Wednesday at Chesapeake Energy Arena in Oklahoma City.

One of Clarkson's most impressive plays came in the fourth quarter. The Cavaliers led 91-89 with 10:21 remaining when Clarkson got the ball just past half court. He dribbled in toward the 3-point line, drawing the defense of Thunder guard Alex Abrines. Clarkson drove in hard with his right hand, before stopping quickly at the top right corner of the paint.

Abrines went flying out of position, badly faked by Clarkson's smooth handles. Clarkson proceeded to calmly pick up his dribble and drain a jump shot.

LeBron James led all scorers with 37 points in the win. James also had eight rebounds and eight assists. Paul George led the Thunder with 24 points.

"I'm just feeling good," Clarkson told reporters after the game. "We still got a long way to go. We are just going to continue to work and focus on one thing, that's winning."

Clarkson joined the Cavaliers on Thursday, the day of the 2018 NBA trade deadline. The Los Angeles Lakers shipped the guard - - and Larry Nance Jr. - - to the Cavaliers in exchange for Channing Frye, Isaiah Thomas and a 2018 first round draft pick. 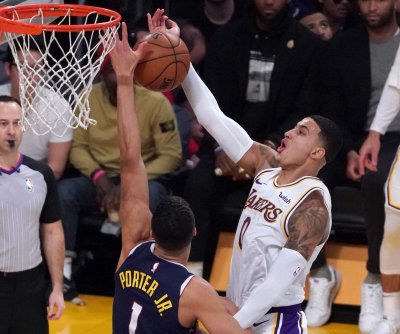