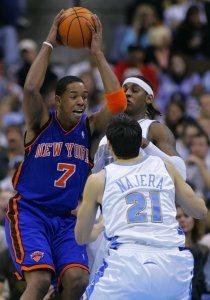 NBA // 2 years ago
Sixers looking for Butler return vs. Cavs
In the month since Jimmy Butler joined the Philadelphia 76ers, things are going pretty well.

NBA // 2 years ago
Bucks' Antetokounmpo hopes for more production vs. Cavs
Giannis Antetokounmpo posted a double-double in helping the Milwaukee Bucks get a win at Toronto on Sunday and sat out a double-digit win over the Cleveland Cavaliers the following night with a neck injury.

NBA // 2 years ago
Lakers' LeBron James makes highly-anticipated return to Cleveland
LeBron James will get a first-hand look at his former team Wednesday night when the Los Angeles Lakers visit the league-worst Cavaliers in Cleveland.

NFL // 2 years ago
Cavaliers host Hawks in Drew's 2018 debut
Nine days ago, the Cleveland Cavaliers stumbled through an ugly loss to the Atlanta Hawks in their home opener.

NBA // 2 years ago
Lonzo Ball's in Lakers' court with Magic visiting
The Lakers might look similar to the opponent they blew out five weeks ago, but the Magic shouldn't expect a repeat performance Wednesday night.

In my opinion I didn't think it was a fighting situation

Channing Thomas Frye (born May 17, 1983, in White Plains, New York) is an American professional basketball player and currently plays for the Phoenix Suns. His positions are center and power forward. He attended the University of Arizona. Standing at 6 ft 11 in and 245 lb, Frye was selected 8th overall by the New York Knicks in the 2005 NBA Draft, and was the first college senior to be selected in that draft. Channing Frye was named the Rookie of the Month for November 2005 along with the New Orleans Hornets' Chris Paul.

Frye scored his career high of 30 points (14–18 FG, 2–2 FT), along with 7 rebounds, 2 blocks and 1 assist in his first matchup with the number-one pick from the 2005 NBA Draft, Andrew Bogut. He matched his career high on January 6, against the Washington Wizards, shooting 11–13 from the floor and 7–8 from the free throw line. He is considered to be one of the best rookies from the 2005 NBA Draft and was consistently ranked high in the NBA Rookie Rankings. On March 21, 2006, Channing sprained his left knee ligament in a game against the Toronto Raptors when Raptors guard Andre Barrett lost his balance and smashed his shoulder into Frye's knee. Channing missed the rest of the 2005–2006 NBA season.

David Lee, a power forward, led the team in rebounding and field goal percentage, and was statistically superior to Frye in almost every category, but Isiah Thomas, until February 3, 2007, kept Frye in the starting lineup. Thomas' rationale was that Frye is a superior perimeter shooter, and his perimeter shooting would make it harder for teams to double team Knicks leading scorer Eddy Curry. On February 3, in a game against the Orlando Magic, Thomas took Frye out of the starting lineup and replaced him with little-used center, Jerome James. James had only appeared in 19 of the Knicks' 48 games, and averaged 2.7 points and 1.9 rebounds in those games. Thomas explained the change, saying, "I think Jerome is one of the best defensive big men in the game in terms of the center position."

FULL ARTICLE AT WIKIPEDIA.ORG
This article is licensed under the GNU Free Documentation License.
It uses material from the Wikipedia article "Channing Frye."
Back to Article
/