Georgian strongman pulls boat with only one finger

Aug. 27 (UPI) -- A Georgian strongman may have set a new world record when he used only a single finger to pull a 220-ton boat a distance of about 16 feet.

A video recorded Sunday shows Giorgi Rostomashvili using a rope tied around his middle finger to pull the Tamara 2, an ocean tug boat weighing about 220 tons.

The boat moved about 16 feet toward shore while Rostomashvili pulled.

The Georgian Records Federation said the attempt was a national record for the heaviest boat pulled with a single finger. The federation said evidence from the attempt is being submitted to Guinness World Records.

Odd News // 12 hours ago
Woman wins $47M lottery jackpot with numbers from husband's dream
Jan. 19 (UPI) -- A Toronto woman who has used the same lottery numbers since they came to her husband in a dream 20 years ago scored a nearly $50 million jackpot with them.

Odd News // 13 hours ago
Giant 'Trump Baby' balloon acquired by the Museum of London
Jan. 19 (UPI) -- The Museum of London announced it has obtained an infamous balloon depicting outgoing U.S. President Donald Trump as a diaper-wearing baby for a protest-themed collection.

Odd News // 15 hours ago
Man spends $400 to find out limping dog was imitating owner
Jan. 19 (UPI) -- A British man said he spent about $400 to have a veterinarian examine his dog's limp, but it turned out the canine was just imitating his owner, who had a broken ankle. 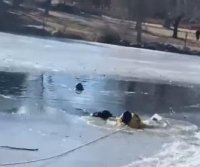 Odd News // 16 hours ago
Stranded dog rescued from icy pond in Colorado
Jan. 19 (UPI) -- Firefighters in Colorado rescued a dog wandered that wandered onto the ice at a frozen pond and fell into the frigid water below.