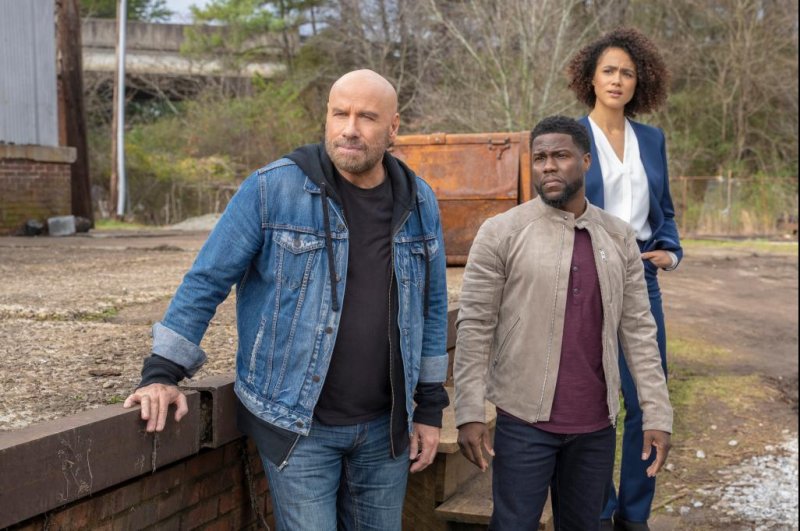 Kevin Hart participates in a hand and footprint ceremony immortalizing him in the forecourt of the TCL Chinese Theatre (formerly Grauman's) in Los Angeles in 2019. File Photo by Jim Ruymen/UPI | License Photo

NEW YORK, July 22 (UPI) -- Die Hart screenwriter and producer Tripper Clancy says Kevin Hart came up with the idea to make a comedy that pokes fun of his aspirations to become a leading man.

In the Quibi series, the Ride Along and Jumanji: Welcome to the Jungle star plays a fictionalized version of himself -- a funnyman tired of playing sidekicks who goes to an action hero academy run by Ron Wilcox, an erratic, inexplicably respected teacher played by John Travolta.

Jean Reno (The Professional) plays the filmmaker who takes Hart's career in a new direction, Nathalie Emmanuel (Game of Thrones) plays an actress who also wants to change her image and Josh Hartnett (Penny Dreadful) plays himself, supposedly one of the school's most successful graduates.

The show includes 10 mini-episodes, which run about eight minutes each. New chapters will be made available through July 29. The first five installments are on the mobile phone app now.

"Kevin was the originator of the idea," Clancy told UPI about Die Hart in a phone interview Tuesday.

"He was going to be an action star and have his version of the James Bond story, but he is one of the funniest guys on the planet, so what does that look like?"

No joke or situation got too ridiculous or personal for Hart, according to Clancy.

"To Kevin's credit, he was very open about pretty much doing anything," the writer said of the actor, who also is a producer on the show. "He wasn't afraid of tarnishing his image or his brand by playing a version of Kevin Hart."

Candid discussions took place between the filmmakers and Hart and his team about whether the comedian could handle the physical side of the role after he was injured in a car crash last year.

"He is a workout fiend and he has really gotten his body back, I think, to the place it was before the accident, so he did as much as he could and then, of course, he has a stunt double that he works with in all of his movies who is super-talented," Clancy said.

No coaxing was needed to get Travolta on board the Die Hart train.

Not only is he a huge Hart fan, but he responded enthusiastically to the script as soon as he read it.

"He came alive at the table read. Once he saw what Kevin was doing, I think John realized, 'Oh, I can just go for it on every take.' He's trying to almost match Kevin's intensity. It's one of my favorite roles that I have ever seen Travolta do," said Clancy, who had a poster for Travolta's classic movie Pulp Fiction on his bedroom wall when he was growing up.

Hartnett was totally up for the self-mockery his role required.

"He was so game for it," Clancy said. "He called Eric [Appel], our director, and was like: 'Hey, I want to talk to the costume designer. I think I should be in maybe a slick suit because I am kind of a douchey Hollywood actor.' We were all thrilled that he just wanted to have fun playing this alternate version of himself."

With most movie theaters still closed, new productions largely shut down and people looking for a distraction from the stress associated with the coronavirus pandemic, Die Hart's release couldn't come at a better time.

"I'm hoping everyone is like 'Oh, my gosh! There's a new, fresh something that we can watch and we can enjoy' and take your mind off of all the other negative things happening in the world for eight minutes at a time."