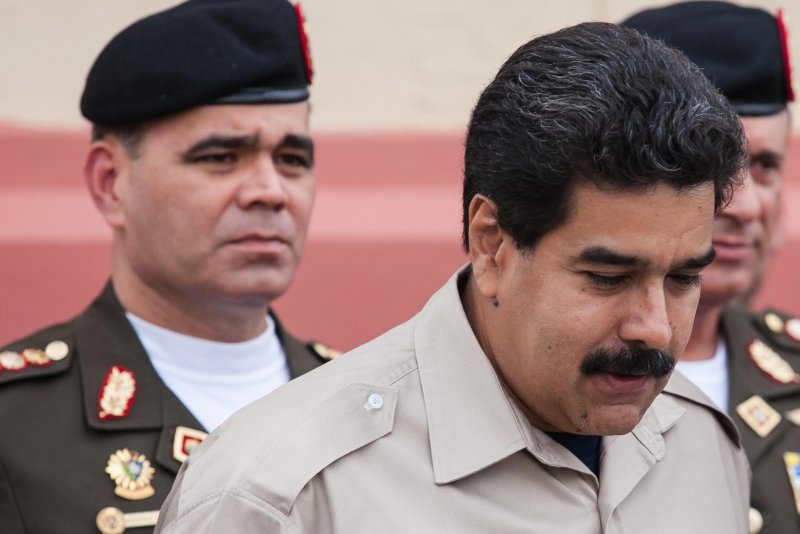 Venezuelan President Nicolas Maduro under increased scrutiny for moving forward with elections seen as rigged in his favor. File photo by Miguel Gutierrez/EPA

Feb. 9 (UPI) -- With oil-related sanctions on the table, the U.S. government said it remains committed to pressuring Venezuela as it prepares for presidential elections.

The Venezuelan government announced plans to hold early presidential elections April 22. Opposition parties and many of the governments in North America have criticized the vote, arguing incumbent President Nicolas Maduro has rigged the process in his favor.

Heather Nauert, a spokeswoman for the U.S. State Department, said after the election announcement that it was "unfortunate the Maduro regime is not courageous enough to contest elections on a level playing field."

U.S. Secretary of State Rex Tillerson said repeatedly during his recent tour of Latin America that targeting one of Venezuela's top sources of revenue -- crude oil - with sanctions was under consideration.

"Obviously, sanctioning the oil or in effect prohibiting the oil to be sold in the United States, or for the United States as well to sell or provide oil to Venezuela, or refined products, is something we continue to consider," he said Sunday during a meeting with his alongside Argentinean counterpart, Jorge Faurie.

Washington already imposed sanctions on Venezuelan government and military officials in December in response to allegations of corruption and repression under the Maduro administration. New oil-related sanctions would strike a severe blow to an economy where inflation is running out of control.

According to the International Monetary Fund, inflation in Venezuela could increase by as much as 13,000 percent this year. Real gross domestic product is projected to fall by about 15 percent for a cumulative GDP decline of almost 50 percent since 2013.

RELATED U.S. mulling over impact of oil-related sanctions on Venezuela

"We will continue to pressure the regime to restore the integrity of the Venezuelan constitution," the U.S. State Department spokeswoman said.