Britain to send 250 troops to U.N. peacekeeping mission in Mali 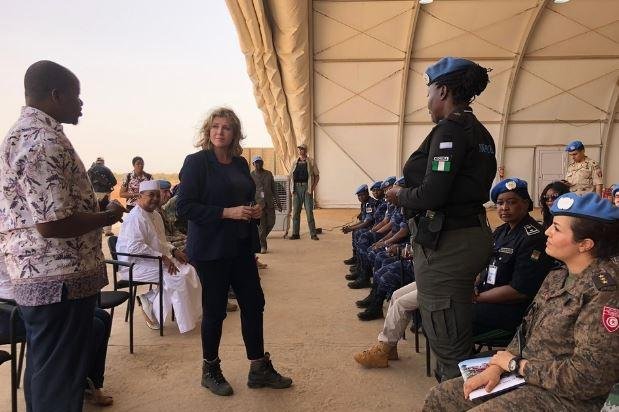 British Defense Secretary Penny Mordaunt, at center, while visiting United Nations peacekeepers in Mali on Monday announced the deployment of 250 more British troops to Mali at the beginning of 2020. Photo courtesy of British Ministry of Defense

The three-year deployment, to begin early in 2020, is Britain's largest since its involvement in Bosnia in the 1990s, and will aid an international force, under the United Nations, of 12,500.

The British troops will deliver long-range reconnaissance capability, the government statement said, and feed on-the-ground intelligence to the mission headquarters in Gao, Mali.

It is regarded as a dangerous assignment, with security in Mali's desert Sahel region deteriorating and an assortment of factions, including Islamic State in West Africa and others aligned with al-Qaeda, contesting for power.

British Defense Secretary Penny Mordaunt made the announcement on the deployment as she visited U.N. peacekeepers in Mali.

"In one of the world's poorest and most fragile regions it is right that we support some of world's most vulnerable people and prioritize our humanitarian and security efforts in the Sahel," Mordaunt said. "U.K. service personnel will work with our partners in the region to help promote peace by combating the threat of violent extremism and protecting human rights in Mali."

Mali has been attempting to curb violence in the country since 2012 when Islamists connected to al-Qaeda seized the country's northern desert area. The military has attempted to drive them out, but jihadists have moved from the country into more populated areas.

After 134 farmers were killed in ethnic conflict in a village in the central Mopti region, south of the Sahel, in March, the Malian government dismissed a number of high-ranking military officials.

One month later, Prime Minister Soumeylou Boubeye Maiga and his cabinet resigned following widespread condemnation of the government's response to the massacre. In June, another attack on a village of 300 in the Mopti region killed 95 people.