Richard Nixon and the Press 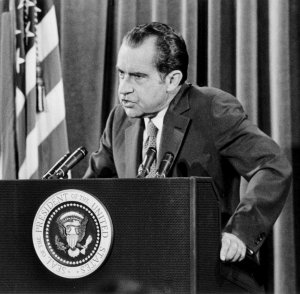 President Nixon told a White House news conference on June 29, 1972 that the Vietnam War could be over --if the talks "go forward in a constructive and serious way" -- by January 20, 1973, whn his term of office ends. (UPI Photo/Files)

Chief Justice Warren Burger: " … that I will faithfully execute the Office of President of the United States … "

President Elect Richard M. Nixon: " … that I will faithfully execute the Office of President of the United States … "

Chief Justice Warren Burger: " … and will, to the best of my ability … "

President Elect Richard M. Nixon: " … and will, to the best of my ability … "

President Elect Richard M. Nixon: " … preserve and protect and defend the Constitution of the United States … "

Ed Karrens: For Richard Milhous Nixon, 1973 couldn't have started better. He was inaugurated for his second term in office, and in his inauguration speech he hinted that peace in Vietnam was almost a reality.

President Richard M. Nixon: "Because of America's bold initiatives, 1972 will be long remembered as the year of the greatest progress since the end of World War II toward a lasting peace in the world."

Ed Karrens: But as the year progressed and his Administration became surrounded by the Watergate Affair, his critics became more harsh. Nixon's known antagonism for the press was augmented in 1973.

President Richard M. Nixon: "I have never heard or seen such outrageous, vicious, distorted reporting in 27 years of public life. I'm not blaming anybody for that. Perhaps what happened is that what we did brought it about, and therefore the media decided that they would have to take that particular line."

Ed Karrens: It was the television media that especially irked the President during the year, and when one TV reporter asked him why he was angry at the press he said …

President Richard M. Nixon: "Don't get the impression that you arouse my anger. You see" --

Unknown Speaker: "Sorry I have that impression."

President Richard M. Nixon: "One can only be angry with those he respects. When a commentator takes a bit of news and then, with knowledge of what the facts are, distorts it viciously, I have no respect for that individual."

Ed Karrens: During the year, President Nixon was asked to explain a lot of things regarding his finances. He admitted he only paid about $1600 in taxes during two of the years he was President. He said he'd received tax benefits as a result of donating his Vice-Presidential papers to the National Archives. They were, according to Nixon, valued at $500,000. Then there was the criticism of how much money he had spent to repair and renovate his homes in Key Biscayne, Florida and in San Clemente, California.

The involvement of two very close friends, Bebe Rebozo and Robert Abplanalp, with the financial and real-estate affairs of Nixon also came under fire. There was also a charge that Nixon sought and got special favors for the IT&T Company. IT&T was being brought to court by the Government on an antitrust case, but Nixon answered his critics and stood his ground.

Ed Karrens: At the end of the year, Nixon made available figures which showed he tripled his net worth during his first five years in office. The report revealed Nixon was a millionaire. But it was the revelations of Watergate and Nixon's actions, and in some cases his inactions, which led many Congressmen to call for his resignation or impeachment.

Senator Edward Brooke: "He was very gracious. He said he understood that my statement was not made with malice; he under- he understood it, the reasoning that I gave for it and … but he -- he did -- thought that that would be the easy way out; he was not gonna accept that suggestion."

Ed Karrens: Although Nixon's popularity dropped to an all-time low according to some public-opinion polls, many people still supported him.