House Republican Leader Gerald Ford acknowledges applause after President Richard Nixon tapped him to be Vice president of the United Stated to succeed Spiro Agnew on October 12, 1973. The announcement, which brought cheers from Congress, was made in the East Room of the White House. (UPI Photo/Files)

Ed Karrens/ Announcer: 1973 in Review. Through the worldwide facilities of United Press International and the UPI Audio Network, you're about to hear the voices of newsmen and newsmakers, the dramatic sounds of the events that are part of the historical record of the year in 1973.

What kind of year was 1973? It was a year that drastically changed the lives of men.

John Dean: "It is my belief that while the President was involved that he did not realize or appreciate the implications of his involvement."

Unknown Speaker: "After hard deliberation and much prayer, I concluded that the public interest would best be served by my stepping down."

Ed Karrens: 1973 was a year that altered the course of governments.

Unknown Speaker: "There is artillery fire on the Suez Canal, the Egyptian front and air activity over the Golan Heights."

Steve Yolland: "The fighting in the streets was extremely intense. It was for six hours downtown Santiago was an inferno."

Unknown Speaker: "So far, there's no word on the fate of Papadopoulos except tanks and troops are ringing the center of Athens where the Presidential Palace is located."

Ed Karrens: It was a year that affected the common man.

President Richard M. Nixon: "I am asking tonight that all gasoline filling stations close down their pumps between 9:00 p.m. Saturday night and midnight Sunday every weekend."

Unknown Speaker: "Instead of asking for a rollback of prices, he suggested a ceiling on prices, which is just a great way to neutralize everyone except all these people who are on the warpath."

Unknown Speaker: "The ship opened up. Three, I don't know what'd you call 'em, subjects emerged from the ship, came, took them by their arm and they said they seemed to float; they didn't walk or -- or run or anything. There was a humming inside the ship and that there were all type of instruments of types that he had never seen before."

Unknown Speaker: "It is a really touching moment here as these prisoners come out of the plane, the first 40 men back from North Vietnam."

Ed Karrens: For others, it was the end of a lifetime.

Unknown Speaker: "Not long ago President Johnson brought me here to this very spot, and he said, 'Billy, one day, you're going to be asked to preach at my funeral. You'll come right here under this tree, and I'll be buried right there.' History will never be able to ignore Lyndon Baines Johnson."

Ed Karrens: But whatever your social status, your political persuasion or economic rank, in some way large or small the year 1973 had to have a profound effect on your life. 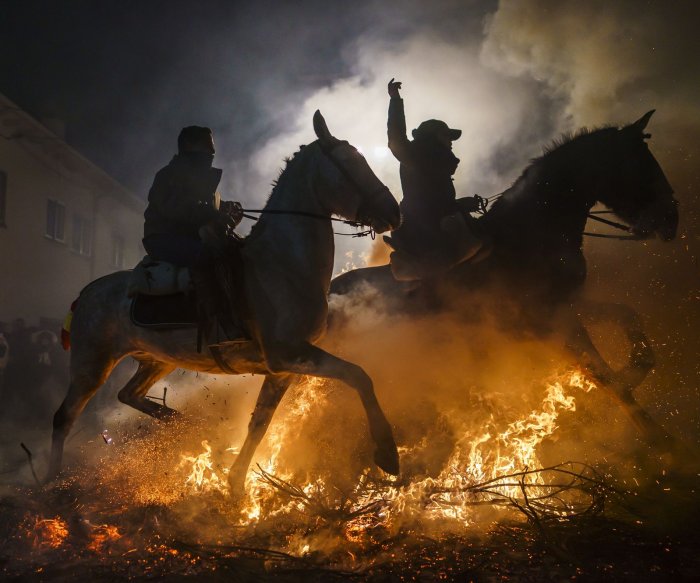 Scenes from Festival of Luminaries in San Bartolome, Spain
Advertisement