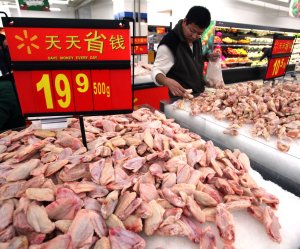 Shopping at the Wal-mart supercenter in Beijing

Wal-Mart Stores, Inc. (NYSE: WMT), branded as Walmart since 2008 and Wal-Mart before then, is an American public multinational corporation that runs chains of large discount department stores and warehouse stores. The company is the world's 18th largest public corporation, according to the Forbes Global 2000 list, and the largest public corporation when ranked by revenue. It is also the biggest private employer in the world with over 2 million employees, and is the largest retailer in the world. The company was founded by Sam Walton in 1962, incorporated on October 31, 1969, and publicly traded on the New York Stock Exchange in 1972. It is headquartered in Bentonville, Arkansas. Walmart is also the largest grocery retailer in the United States. In 2009, it generated 51% of its US$258 billion sales in the U.S. from grocery business.[2] It also owns and operates the Sam's Club retail warehouses in North America. Walmart has 8,500 stores in 15 countries, under 55 different names.[3] The company operates under its own name in the United States, including the 50 states and Puerto Rico. It operates in Mexico as Walmex, in the United Kingdom as Asda, in Japan as Seiyu, and in India as Best Price. It has wholly owned operations in Argentina, Brazil, and Canada. Walmart's investments outside North America have had mixed results: its operations in the United Kingdom, South America and China are highly successful, whereas ventures in Germany and South Korea were unsuccessful.

FULL ARTICLE AT WIKIPEDIA.ORG
This article is licensed under the GNU Free Documentation License.
It uses material from the Wikipedia article "Walmart."
Back to Article
/