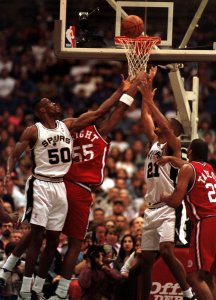 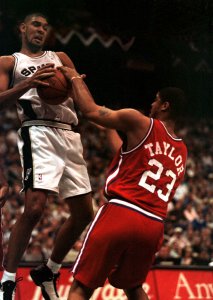 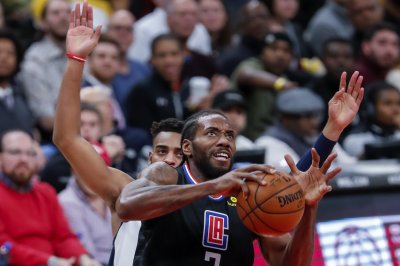 NBA // 2 years ago
Spurs look to climb back into playoff picture against Magic
San Antonio and Orlando meet on Tuesday in a some-one's-got-to-win-so-how-about-us game at the AT&T Center in San Antonio.

They are a better team than we are right now

I'm just worried about rebounding the ball and trying to defend

In Sports from United Press International May 16, 2003

Duncan repeats as NBA Most Valuable Player May 04, 2003

We were in the game, but they did a good job of staying with us

Timothy Theodore "Tim" Duncan (born April 25, 1976) is a Virgin Islander American professional basketball player for the San Antonio Spurs of the National Basketball Association (NBA). The 6-foot 11-inch (2.11 m), 260-pound (118 kg) power forward/center is a four-time NBA champion, two-time NBA MVP, three-time NBA Finals MVP, and NBA Rookie of the Year. The Spurs team captain, he is a 13 time NBA All-Star and the only player in NBA history to be selected both All-NBA and All-Defensive Teams during each of his first 13 seasons.

Duncan started out as a swimmer and only began playing basketball in ninth grade after Hurricane Hugo destroyed the only Olympic-sized pool on Saint Croix. He soon became a standout for St. Dunstan's Episcopal High School, and had an illustrious college career with the Wake Forest University Demon Deacons, winning the Naismith College Player of the Year, USBWA College Player of the Year and John Wooden awards in his final year. Duncan graduated from college before entering the 1997 NBA Draft as the number one pick, and his list of accomplishments, remarkable consistency, and leadership in the Spurs' NBA championship runs in 1999, 2003, 2005, and 2007 have led basketball experts to consider him to be one of the greatest power forwards in NBA history.

Off the court, Duncan is known for his quiet and unassuming ways, as well as his active philanthropy. He holds an honors degree in psychology and created the Tim Duncan Foundation to raise general health awareness and fund education and youth sports in various parts of the United States.

FULL ARTICLE AT WIKIPEDIA.ORG
This article is licensed under the GNU Free Documentation License.
It uses material from the Wikipedia article "Tim Duncan."
Back to Article
/