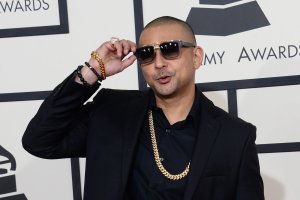 Music // 2 months ago
Sia to release 'Every Day is Christmas' deluxe edition with 3 new songs
Sia will release "Everyday is Christmas (Snowman Deluxe Edition)," a new version of her 2017 holiday album.

Sean Paul was born in Kingston, Jamaica and spent his early years in Upper Saint Andrew Parish, a few miles north of Kingston. His parents, Garth and Frances, were both talented athletes, and his mother is a well-known painter. His paternal grandfather was a Sephardic Jew whose family emigrated from Portugal, and his paternal grandmother was Afro-Caribbean; his mother is of English and Chinese Jamaican descent. Sean Paul was raised as a Catholic. Many members of his family are swimmers. His grandfather was on the first Jamaican men's national water polo team. His father also played water polo for the team in the 1960s, and competed in long-distance swimming, while Sean Paul's mother was a backstroke swimmer. Sean Paul played for the national water polo team from the age of thirteen to twenty-one, when he gave up the sport in order to launch his musical career. He attended the Wolmers High School for Boys, Hillel Academy High School, and the College of Arts, Science, and Technology, now known as the University of Technology, where he was trained in commerce with a view to pursuing an occupation in hotel management.

He made a quick cameo appearance in the 1998 film Belly on stage performing. He made a very successful collaboration with DMX & Mr. Vegas (Top Shotter) as a soundtrack of the film. In 2000, Sean Paul released his debut album, Stage One with VP Records. In 2002, he began working extensively with a team of producers and choreographers from Toronto, namely Jae Blaze and Blaze Entertainment and announced the release of his second album, Dutty Rock. Pushed by the success of the singles "Gimme the Light" and the Billboard Hot 100 topper, "Get Busy", the album was a worldwide success, eventually selling over six million copies. Simultaneously, Sean Paul was heard on Beyoncé's U.S. #1 single "Baby Boy" and Blu Cantrell's "Breathe", a chart hit in Europe. Both helped to push his reputation further still in the United States.

FULL ARTICLE AT WIKIPEDIA.ORG
This article is licensed under the GNU Free Documentation License.
It uses material from the Wikipedia article "Sean Paul."