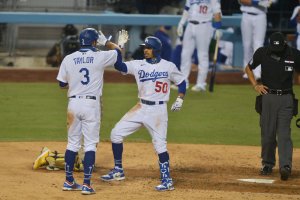 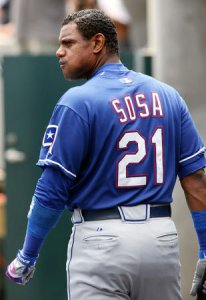 MLB // 4 years ago
Arizona Diamondbacks beat Miami Marlins, clinch top MLB wild-card spot
Outfielder J.D. Martinez has been a key cog in Arizona's success since arriving July 18, so perhaps it was fitting that his walk-off single on Sunday guaranteed the Diamondbacks a home wild-card game.

I still don't have an offer, and I shouldn't be looking for offers out there

Those who saw me training know that I'm hitting the ball with the usual authority. I just hope to get the chance to prove that I'm still a threat

A lot people say my numbers were down, but I was hurt

Sosa's Major League career began with the Texas Rangers in 1989. After a stint with the Chicago White Sox, Sosa became a member of the Chicago Cubs in 1992 and subsequently became one of the league's best hitters. In 1998, Sosa and Mark McGwire achieved national fame for their home run-hitting prowess in pursuit of Roger Maris' home run record. Although a fan favorite, Sosa fell out of favor in Chicago after he was caught using a corked bat in a 2003 game and later left the team during the final game of the 2004 season. Sosa finished his career with brief stints with the Baltimore Orioles and the Texas Rangers. With the Rangers, Sosa hit his 600th career home run to become the fifth player in MLB history to reach the milestone. He is also the all-time home run leader among foreign-born MLB players. Furthermore, Sosa is one of only two National League Players to ever reach 160 RBI, a milestone he reached in 2001. The other was Cubs player and RBI Champion Hack Wilson during his record setting 1930 season in which he hit 191 RBI. Sosa is the only player to have hit 60 or more home runs in a single season three times.

Sosa has long been the subject of speculation about suspected anabolic steroid use during his playing career. On June 16, 2009, The New York Times reported that Sosa had failed a test for performance enhancing drugs in 2003.

FULL ARTICLE AT WIKIPEDIA.ORG
This article is licensed under the GNU Free Documentation License.
It uses material from the Wikipedia article "Sammy Sosa."