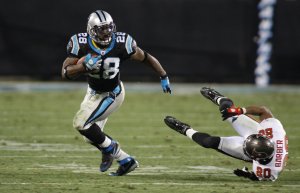 NFL // 3 years ago
Report: Search underway to replace Buccaneers' Koetter
According to a CBS Sports report Sunday, Tampa Bay Buccaneers coach Dirk Koetter is unlikely to return in 2019 and that a search for his replacement is already taking place.

NFL // 3 years ago
Winston, defense igniting upswing for Buccaneers
Tampa Bay Buccaneers quarterback Jameis Winston is on an upswing and his team is doing the same.

It would be a maze of Cover 2, 3, deep zone blitz-type schemes. It may be impossible to find your way around, but he understands himself and that's all I care about

Jamael Orondé "Rondé" Barber (pronounced /ˈrɒndeɪ/; born April 7, 1975 in Roanoke, Virginia) is an American football cornerback for the Tampa Bay Buccaneers of the National Football League. He was drafted by the Buccaneers in the third round of the 1997 NFL Draft. He played college football at Virginia.

Barber attended Cave Spring High School in Roanoke, Virginia, and was a standout in football, wrestling, and track. In football, he was a three time All-District selection. In track, he won the national title in the 55 meter hurdles as a senior.

FULL ARTICLE AT WIKIPEDIA.ORG
This article is licensed under the GNU Free Documentation License.
It uses material from the Wikipedia article "Ronde Barber."