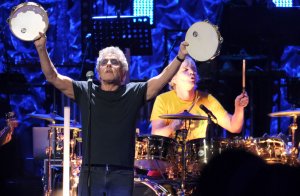 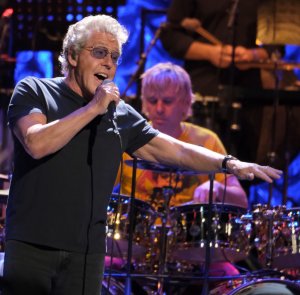 Entertainment News // 6 years ago
The Who reschedules postponed tour dates
The Who has announced its new tour schedule after postponing several dates due to lead singer Roger Daltrey's health.

This reminds me of what it used to be like when we started, when we were rough and ready and didn't let anyone stand in the way of our dream

Liverpool has such a great musical history. I can't believe it's been almost four decades since we played there

We've got a rehearsal tape of John playing one of the songs. We are thinking about using it on the album

Roger Harry Daltrey, CBE (born 1 March 1944), is an English singer-songwriter and actor, best known as the founder and lead singer of English rock band The Who. He has maintained a musical career as a solo artist and has also worked in the film industry, acting in a large number of films, theatre and television roles and also producing films.

Roger Harry Daltrey was born in the Hammersmith area of London, but was raised in Acton, the same working class suburban neighbourhood that produced fellow Who members Pete Townshend and John Entwistle. He was one of three children born to parents Irene and Harry Daltrey, and grew up with two sisters, Gillian and Carol. Harry Daltrey worked for a water closet manufacturer, and Irene Daltrey was told she would be unable to have children because of losing a kidney in 1937. Nevertheless, she went into labour during a World War II air raid and gave birth to her son at the nearby Hammersmith Hospital, West London. At the age of three, the young Roger swallowed a rusty nail which had to be surgically removed, leaving a visible scar. At the age of five, the rust from the nail caused an ulcer in his stomach which required him to be hospitalised.

Daltrey attended Victoria Primary School and then Acton County Grammar School for boys along with Pete Townshend and John Entwistle. He showed academic promise in the English state school system, ranking at the top of his class on the eleven plus examination that led to his enrollment at the Acton County Grammar School. His parents hoped he would eventually continue on to study at the university, but Daltrey turned out to be a self-described "school rebel" and developed a dedicated interest in the emerging rock and roll music scene instead.

FULL ARTICLE AT WIKIPEDIA.ORG
This article is licensed under the GNU Free Documentation License.
It uses material from the Wikipedia article "Roger Daltrey."