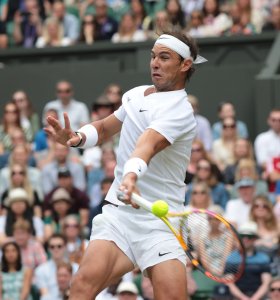 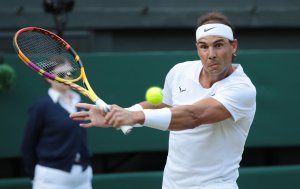 Sports News // 1 month ago
Jabeur-Rybakina, Kyrgios-Djokovic set for historic Wimbledon finals
No. 3 seed Ons Jabeur of Tunisia is expected to make more tennis history as the favorite to beat No. 17 Elena Rybakina of Kazakhstan in the Wimbledon 2022 women's singles final Saturday in London.

Sports News // 1 month ago
Rafael Nadal, Coco Gauff, Amanda Anisimova advance to 3rd round at Wimbledon
Two-time Wimbledon champ Rafael Nadal and Americans Cori "Coco" Gauff and Amanda Anisimova are among the players who have advanced to the third round in London, where play keeps being interrupted by rainy weather.

Sports News // 1 month ago
Swiatek moves on, Pliskova upset in Round 2 as rain suspends Wimbledon
Iga Swiatek and Stefanos Tsitsipas were among the top seeds to advance with second-round wins Thursday at Wimbledon 2022. Women's No. 6 seed Karolina Pliskova exited after an upset loss to England's Katie Boulter.

Sports News // 1 month ago
Wimbledon 2022: Sakkari moves on; Opelka, Raducanu ousted
No. 5 seed Maria Sakkari moved on to the third round of Wimbledon 2022 with a straight sets victory, while Reilly Opelka, the second-highest seeded American man, lost his second-round match in London.

Sports News // 1 month ago
Wimbledon 2022: No. 2 Kontaveit, No. 3 Ruud upset; Djokovic onto third round
Top-seed Novak Djokovic raced to a straight-sets win, while women's No. 2 Anett Kontaveit and men's No. 3 Casper Ruud sustained second-round upsets at Wimbledon 2022 on Wednesday in London.

Sports News // 1 month ago
Serena Williams upset at Wimbledon, 'can't answer' retirement questions
Tennis legend Serena Williams, a wild card at Wimbledon this year, was upset Tuesday in her first Grand Slam match in more than a year -- and said afterward that she couldn't give an answer when asked if she'll retire.

Sports News // 1 month ago
Wimbledon tennis: Swiatek extends streak, Gauff rallies in first round
Women's world No. 1 Iga Swiatek extended her winning streak to 36 consecutive matches in the first round of Wimbledon on Tuesday in London. Cori "Coco" Gauff and Paula Badosa were among the other top women to advance.

I will not go out and play, especially on the Wimbledon Center Court, if I am not 100 percent ready to play

I have been having some problems in the past months with my knees, that's no secret, that did not allow me to compete always at 100 percent

I don't like to lose, but I had my chances

Rafael "Rafa" Nadal Parera (Catalan pronunciation: ; Spanish pronunciation: ; born 3 June 1986) is a Spanish professional tennis player and a former World No. 1. As of 4 July 2011 (2011 -07-04), he is ranked No. 2 by the Association of Tennis Professionals (ATP). He is widely regarded as one of the greatest players of all time; his success on clay has earned him the nickname "The King of Clay", and has prompted many experts to regard him as the greatest clay court player of all time.

Nadal has won ten Grand Slam singles titles, including six French Open titles, the 2008 Olympic gold medal in singles, a record 19 ATP World Tour Masters 1000 tournaments, and also was part of the Spain Davis Cup team that won the finals in 2004, 2008 and 2009. He completed the career Grand Slam by winning the 2010 US Open, being the seventh player in history, and the youngest in the open era, to achieve it. He is the second male player to complete the Career Golden Slam (winner of the four grand slams and the Olympic Gold medal) after only Andre Agassi.

Nadal had a 32-match winning streak in 2008, starting at the 2008 Masters Series Hamburg to the 2008 Western & Southern Financial Group Masters and Women's Open, which included titles at Hamburg, the French Open (where he did not drop a set), Queen's Club, his first ever title at Wimbledon, and the Rogers Cup. In 2011, by winning the Monte Carlo Masters, he became the only player to have won seven editions of a tournament in a row at the ATP level. Nadal was ranked world No. 2, behind Roger Federer, for a record 160 consecutive weeks before earning the top spot, which he held from 18 August 2008 to 5 July 2009. He regained the world No.1 ranking on 7 June 2010, after winning his fifth French Open title. He held it till 3 July 2011, when Novak Djokovic replaced him.

FULL ARTICLE AT WIKIPEDIA.ORG
This article is licensed under the GNU Free Documentation License.
It uses material from the Wikipedia article "Rafael Nadal."