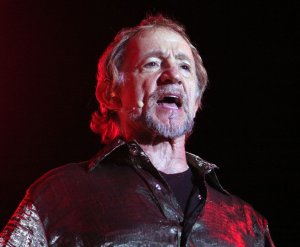 Entertainment News // 1 year ago
In memoriam: Celebrity deaths of 2019
2019 saw the unexpected deaths of rising music and TV stars in their 20s, as well as beloved, seasoned entertainers.

Top News // 3 years ago
The Almanac
On Feb. 13, 1935, Bruno Richard Hauptmann was convicted of murdering baby Charles A. Lindbergh, Jr.

Top News // 4 years ago
The Almanac
On Feb. 13, 1935, Bruno Richard Hauptmann was sentenced to death for the murder of baby Charles A. Lindbergh, Jr.

I am extraordinarily grateful, amazed and humbled by the encouragement, affection and support I've received so far

Peter Tork (born February 13, 1942) is an American musician and actor, best known as a member of The Monkees.

Tork was born Peter Halsten Thorkelson in Washington, D.C.. Although born in 1942, many news articles report him as born in 1944 in New York City as this was the date and place given on early Monkees press releases. His father was John Thorkelson, an economics professor at UConn and his mother was Virginia Thorkelson. He began studying piano at the age of nine, showing an aptitude for music by learning to play several different instruments, including the banjo and acoustic and bass guitars. Tork attended Windham High School in Willimantic, Connecticut, then was a member of the first graduating class at E.O. Smith High School in Storrs, Connecticut. He attended Carleton College before he moved to New York City, where he became part of the folk music scene in Greenwich Village during the first half of the 1960s. While there, he befriended other up-and-coming musicians such as Stephen Stills.

Stills suggested Tork audition for a new television series about four pop-rock musicians, when the producers asked if Stills 'had a better looking (musician) friend'. Tork got the job and became one of the four members of The Monkees, who ended up being both characters in a television sitcom and a band in their own right.

FULL ARTICLE AT WIKIPEDIA.ORG
This article is licensed under the GNU Free Documentation License.
It uses material from the Wikipedia article "Peter Tork."
Back to Article
/