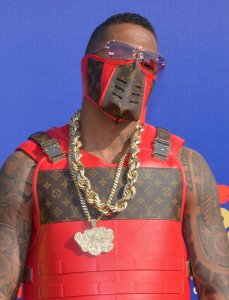 TV // 1 month ago
Omarion eliminated in 'Masked Singer' semifinals
Singer Omarion, dressed as a yeti, was eliminated from "The Masked Singer" on Wednesday night.

TV // 2 months ago
Mark McGrath gets the boot on 'Masked Singer'
Singer-songwriter Mark McGrath -- dressed as a whale -- was eliminated on "The Masked Singer" Wednesday night.

I've got co-workers tip-toeing past my door pretending like they're using the copier, going in all of the pantries, but really they're just trying to see if Mariah is going to walk in. She comes by every once in a while, so they might catch her

My wife just gave me the most incredible anniversary gift ever in life! I won't ever be able to top this

Nicholas Scott "Nick" Cannon (born October 8, 1980) is an American actor, comedian, rapper, radio and television personality. On television, Cannon began as a teenage sketch comedian on All That before going on to host The Nick Cannon Show, Wild 'N Out, and America's Got Talent. He acted in the films Drumline, Love Don't Cost a Thing, and Roll Bounce. As a rapper, he released his debut self-titled album in 2003 with the hit single "Gigolo", a collaboration with singer R. Kelly. In 2006, Cannon recorded singles "Dime Piece" and "My Wife" for a planned album Stages, which was never released. Cannon married singer Mariah Carey on April 30, 2008.

Cannon was born in San Diego to Beth Gardner (1959-) and James Cannon (1954–2010), a televangelist who hosted a public access TV ministry in Charlotte, North Carolina. As a child, Cannon divided his time with his mother and grandmother in San Diego and with his father in Charlotte. He began performing at age nine. Cannon is the nephew of Katie Geneva Cannon, who is currently serving as Annie Scales Rogers Professor for Christian Ethics at Union Presbyterian Seminary in Richmond, Virginia.

Before filming drumline he lived in Augusta Georgia on Nellyville Road. and at age 11, he landed a spot on his father's cable access program performing stand-up comedy. When Cannon was in his mid-teens, he moved to Hollywood, where he performed stand up at The Improv, The Laugh Factory and the Comedy Store. Cannon attended Quail Hollow Middle School. He graduated from Monte Vista High School, in 1998.

FULL ARTICLE AT WIKIPEDIA.ORG
This article is licensed under the GNU Free Documentation License.
It uses material from the Wikipedia article "Nick Cannon."
Back to Article
/