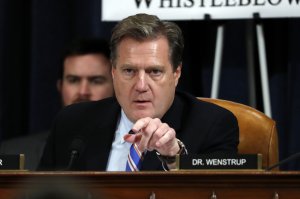 U.S. News // 2 years ago
Trump visits Dayton, El Paso after shootings, greeted by protesters, supporters
President Donald Trump and first lady Melania Trump's met with victims of the Dayton, Ohio, and El Paso, Texas, shootings Wednesday as they were greeted with both protests and shows of support.

World News // 2 years ago
WHO to invest $136M to combat snakebites
Because snakebites kill and disable hundreds of thousands of people every year, the World Health Organization unveiled a new strategy Thursday to mitigate the dangers.

I am delighted that we have agreed to acquire Tenix Defence, which will transform our business in Australia

Michael R. (Mike) Turner (born January 11, 1960) is a Republican member of the U.S. House of Representatives from Ohio, representing that state's third congressional district, which covers most of the city of Dayton.

Turner, a protestant Christian, was born in Dayton, Ohio and received a bachelor of arts degree from Ohio Northern University (Ada, Ohio) in 1982, a law degree from Case Western Reserve University (Cleveland, Ohio) in 1985, and a master's degree in business administration from the University of Dayton (Dayton, Ohio) in 1992. Turner was a lawyer in private practice before he was elected mayor of Dayton, a position he served from 1994 to 2002. After losing in a reelection bid to Democrat Rhine McLin, Turner ran for Congress. The third district seat was open because of the resignation of 23-year Democratic incumbent Tony P. Hall. Turner was elected in 2002, defeating Hall's last-minute substitute, Rick Carne, and began serving in 2003 (108th Congress). Voting with the Republican Party over 88% of the time, Turner is a member of both the moderate Republican Main Street Partnership and the conservative Republican Study Committee, two groups with conflicting positions on policy. For example, the RMSP supports stem cell research and opposes the Federal Marriage Amendment, while the RSC opposes stem cell research and supports the FMA. He was reelected handily in 2004. In 2006, the Democrats planned to target Turner for defeat. However, the primary winner, Stephanie Studebaker, dropped out after being arrested for domestic violence. Turner handily defeated a replacement candidate.

As of 2006, Turner is a member of the Armed Services, Government Reform, and Veterans' Affairs committees. Turner believes strongly in immigration reform, saving manufacturing jobs, spurring economic development in former brownfield sites. He also has petitioned the BRAC Commission for an expansion to Wright-Patterson Air Force Base, which is very important to his district's economy. This effort proved successful in 2008, when it was announced that 1,000 jobs and over $230 million in federal funding would move to Wright-Patterson. Turner has said that this is the largest single investment in Wright-Patterson since World War II. In 2009, Turner was named as the Ranking Member of the Strategic Forces Subcommittee on the House Armed Servies Committee.

FULL ARTICLE AT WIKIPEDIA.ORG
This article is licensed under the GNU Free Documentation License.
It uses material from the Wikipedia article "Mike Turner."
Back to Article
/