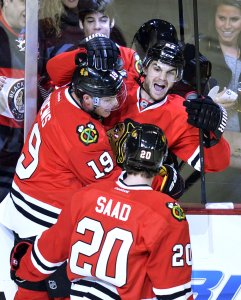 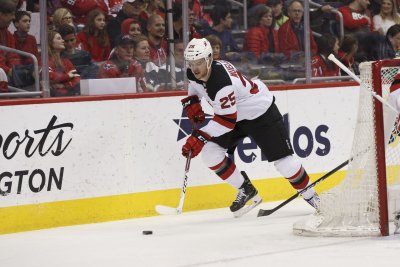 NHL // 2 years ago
Gaudreau watch on as Flames host Predators
All eyes will be on Calgary Flames morning skate Friday to see if Johnny Gaudreau appears.

Sports News // 3 years ago
Ryan Getzlaf's good bounce goal gives Anaheim Ducks 2-0 series lead
ANAHEIM, Calif. -- With the help of a fortunate bounce, Anaheim center Ryan Getzlaf again captained his team to a victory over the visiting Calgary Flames, scoring the game-winning goal late in the third period to lift the Ducks to a 3-2 victory on Saturday night.

Frolík played two seasons in the Czech Extraliga for Rabat Kladno before being selected tenth overall in the 2006 NHL Entry Draft by the Florida Panthers. While playing in Kladno, Frolík was constantly nicknamed The Baby Jágr due to his identical playing style and appearance to Jaromír Jágr, who also played for Kladno. To add to his overwhelming resemblance, Frolík, who cites Jágr as his role model, wore #68 at the Florida Panthers' rookie camp.

FULL ARTICLE AT WIKIPEDIA.ORG
This article is licensed under the GNU Free Documentation License.
It uses material from the Wikipedia article "Michael Frolik."
Back to Article
/