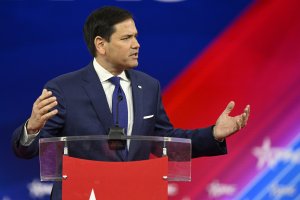 U.S. News // 2 months ago
CPAC: DeSantis praises Florida 'freedom' on Day 1, Trump to speak Saturday
Former President Donald Trump and Florida Gov. Ron DeSantis are among the speakers for the Conservative Political Action Conference, which starts Thursday and runs through the weekend.

U.S. News // 5 months ago
Hospitals decry funding cuts in Build Back Better act
Hospital groups and some members of Congress are demanding Democrats drop the proposed reduction in federal funding for some hospitals in the Biden administration's $1.7 trillion social spending bill.

If you raise the minimum wage, you're going to make people more expensive than a machine

Our enemies around the world are taking advantage of Obama's weakness. We need new leadership that will stand up to people like [North Korean leader] Kim Jong Un and ensure our country has the capabilities necessary to keep America safe

Fueling Iran's regional ambitions and its support for Assad ... will only cause ISIS to grow stronger, not weaker

Netanyahu: Iran has not stopped its development of nuclear weapons Jan 17, 2016

The more Republicans become less distinguishable from Democrats, the less people will vote for Republicans

Marco Rubio on the campaign trail

Marco Antonio Rubio (born May 28, 1971) is the junior United States Senator from the state of Florida, serving since January 2011, and is a candidate for President of the United States in the 2016 election. He previously served as Speaker of the Florida House of Representatives. Rubio is a Cuban American native of Miami. He graduated from the University of Florida and the University of Miami School of Law. In the late 1990s, he served as a City Commissioner for West Miami and was elected to the Florida House of Representatives in 2000, representing the 111th House district.

FULL ARTICLE AT WIKIPEDIA.ORG
This article is licensed under the GNU Free Documentation License.
It uses material from the Wikipedia article "Marco Rubio."