Movies // 3 months ago
Johnny Flynn: 'Stardust' shows David Bowie's struggles
Johnny Flynn plays David Bowie in the movie "Stardust" and says the film depicts a time before Bowie's fame during which he struggled with his own persona.

Entertainment News // 9 months ago
Rock guitarist Bob Kulick dead at 70
Rock musician Bob Kulick -- a guitarist who collaborated with KISS and the late Lou Reed -- has died at age 70, his family confirmed.

Entertainment News // 1 year ago
Dr. John, New Orleans singer, dead at 77
New Orleans music legend Dr. John, best known for his psychedelic and funk music along with his voodoo-inspired persona, has died at the age of 77. 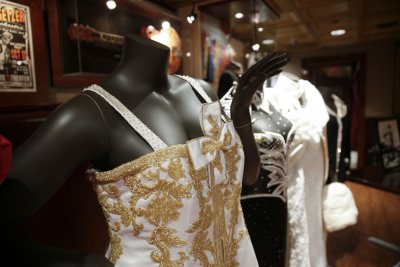 Entertainment News // 2 years ago
Aretha Franklin's dresses to go on auction in NYC
Dozens of stage outfits from Aretha Franklin's closet went on display in New York ahead of a planned auction of iconic rock 'n' roll memorabilia next month.

Top News // 4 years ago
The Almanac
On Oct. 27, 1954, Benjamin O. Davis, Jr., commander of the 332nd Fighter Group, the Tuskegee Airmen, became the first African-American promoted to the rank of general in the United States Air Force.

I've always been a fan of eclectic radio, such as FM radio in the past when you could hear stations play widely divergent music, ranging from rock to country to jazz to opera

The trade-off is you have a lot available to you and it sounds bad. People have got to demand a higher standard

That was one of the tapes rescued from the obscurity of the anti-binaural (an archaic 360 degree sound recording system). We were able to put it back to where it's supposed to be. It sounds as though you're in a club surrounded by the audience with the band in front of you, and people tinkling and yelling in back of you and chairs scraping. Its definitely exciting

Lewis Allan "Lou" Reed (born on March 2, 1942) is an American rock musician, songwriter, and photographer. He is best known as guitarist, vocalist, and principal songwriter of The Velvet Underground, and for his successful solo career, which spans several decades and crosses multiple genres. The Velvet Underground gained little mainstream attention during their career, but became one of the most influential bands of their era. As the Velvet Underground's main songwriter, Reed wrote about subjects of personal experience that rarely had been examined so openly in rock and roll, including a variety of sexual topics and drug culture.

After his departure from the group, Reed began a solo career in 1971. He had a hit the following year with "Walk on the Wild Side", although for more than a decade he evaded the mainstream commercial success its chart status offered him. Reed's work as a solo artist has frustrated critics wishing for a return of the Velvet Underground. The most notable example is 1975's infamous double album of recorded feedback loops, Metal Machine Music, upon which Reed later commented: "No one is supposed to be able to do a thing like that and survive." He is also responsible for the name and popularization of ostrich tuning.

By the late 1980s, however, he had gained recognition by the music community as an elder statesman of rock.

FULL ARTICLE AT WIKIPEDIA.ORG
This article is licensed under the GNU Free Documentation License.
It uses material from the Wikipedia article "Lou Reed."
Back to Article
/