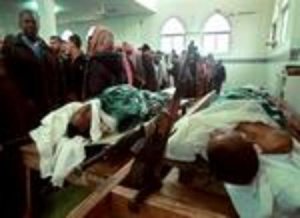 World News // 2 months ago
Hamas, Israel agree to simmer tensions
The Palestinian militant group Hamas has announced a Qatari-brokered deal has been reached to simmer escalating tensions with Israel.

World News // 1 year ago
Israel fires 260 airstrikes across Gaza after being hit by 600 rockets
Responding to approximately 430 rockets fired toward Israel over the weekend, the Israel Defense Forces hit 260 targets across Gaza.

World News // 1 year ago
Israel extends Gaza Strip coastal fishing zone
Israel allowed the fishing zone off the Gaza Strip coast to be expanded to 15 nautical miles Monday as it continued to relax restrictions after protests there and rocket fire from the Palestinian territory.

World News // 1 year ago
Hamas, Israel continue fighting despite reports of a cease-fire
Despite news of a cease-fire between Israel and the Palestinian militant group Hamas, rockets continued to be launched from both sides of the conflict.

Kerem Shalom (Hebrew: כֶּרֶם שָׁלוֹם‎, lit. Vineyard of Peace) is a kibbutz in the Eshkol Regional Council and a border crossing near the meeting of the Gaza Strip-Israel-Egypt borders.

The kibbutz was founded in 1966 adjacent to the triborder area by members of Hashomer Hatzair. Its name includes the word shalom since the members believed that the location would play a role in establishing peace and ending the Arab-Israeli conflict. The kibbutz came apart in 1996, but was re-established in 2001.

In March 2006, a deadly Avian influenza virus was identified in turkey coops in Kibbutz Kerem Shalom.

FULL ARTICLE AT WIKIPEDIA.ORG
This article is licensed under the GNU Free Documentation License.
It uses material from the Wikipedia article "Kerem Shalom."
Back to Article
/