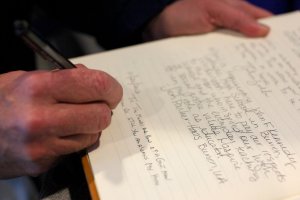 U.S. News // 3 weeks ago
Judge orders Justice Department's police commission to halt work
A federal judge on Thursday ordered a law enforcement commission established by President Donald Trump not to release their findings in a report because their meetings violated transparency laws.

U.S. News // 2 years ago
Judge: Trump administration must reinstate DACA
A federal judge ruled that a program giving protections to some undocumented immigrants brought to the United States as children must be reinstated.

Science News // 4 years ago
Peregrines remain faithful falcons, even in the city
New research shows that even in the city, Peregrine falcons remain committed to their partners.

TV // 4 years ago
'Downton Abbey' wraps up six-season run on PBS [Spoiler alert!]
The British costume drama "Downton Abbey" wrapped up its six-season run on PBS in the United States Sunday night.
U.S. News // 7 years ago
Index of Ensign probe documents to go to watchdog group
A watchdog group said Monday it won a "major victory" in its effort to obtain documents in the U.S. Justice Department's John Ensign sex scandal investigation.
U.S. News // 7 years ago
U.S. attorney's derogatory Facebook comments under scrutiny
A federal prosecutor in Texas said he will look into online posts in which an assistant prosecutor makes derogatory comments about President Barack Obama.
U.S. News // 7 years ago
Under the U.S. Supreme Court: Drones over America
Suddenly drones are everywhere -- not in the skies over the United States, as they will be in their thousands in a few years, and not just hovering over foreign battlefields to strike terror in the heart of al-Qaida -- but as the focus of debate in the U.S. Congress and elsewhere.
U.S. News // 8 years ago
Judge orders Guantanamo tapes turned over
The U.S. Defense Department must turn over video of "forced cell extractions" of Guantanamo Bay inmates, a federal judge says.

John Bates (born 1938 Ponteland) was a fashion designer who was part of the boutique scene that blossomed in London in the 1960s.

Bates apprenticed under Gerard Pipart at Herbert Sidon. From 1959 he began designing under the name Jean Varon.

Bates' work as Jean Varon in the 1960s was particularly modernistic. He designed dresses with bare midriffs, sheer panels, and very short hemlines, and as early as 1962 was designing high-fashion plastic garments. In 1965, one of his dresses with a mesh midriff was chosen as the Dress of the Year and donated to the Fashion Museum in Bath, which in 2006 held a major retrospective show of his work.

FULL ARTICLE AT WIKIPEDIA.ORG
This article is licensed under the GNU Free Documentation License.
It uses material from the Wikipedia article "John Bates."
Back to Article
/