Nov. 5 (UPI) -- The U.S. Department of Justice petitioned the Supreme Court Monday to intervene in a trio of cases regarding the termination of the Deferred Action for Childhood Arrivals program.

The Justice Department requested the Supreme Court review three cases from California, New York and Washington, D.C., that seek to block President Donald Trump's move to end the program known as DACA. The program protects more than 700,000 undocumented immigrants brought to the United States as children from deportation and enables them to get work permits since being implemented by the Obama administration.

"An immediate grant of certiorari is necessary to obtain an appropriately prompt resolution of this important dispute," the Justice Department said. "Even if a losing party were immediately to seek certiorari from a decision of one of the courts of appeals, this court would not be able to review that decision in the ordinary course until next term at the earliest."

In October, the Justice Department filed notice it would seek the Supreme Court's intervention if the 9th Circuit Court of Appeals didn't issue a verdict on challenges against the program by Oct. 31.

"The district court's order requires the government to indefinitely tolerate -- and, indeed, affirmative sanction -- an ongoing violation of federal law being committed by nearly 700,000 aliens pursuant to the DACA policy," the agency said.

Solicitor General Noel Francisco said it was imperative for the Supreme Court to get the case on the justices' docket for the current term, which is set to end in June.

"Absent prompt intervention from this court, there is little chance the court would resolve this dispute for at least another year," Francisco said.

Trump announced plans to phase out the program in September 2017, but District Judge John Bates in Washington, D.C., ruled in August that the program must be fully restored.

U.S. News // 2 hours ago
Pickup truck drives into Pride parade in Florida; one dead, one hurt
June 20 (UPI) -- A pickup truck plowed into the start of the Stonewall Pride Parade near Fort Lauderdale on Saturday night, killing one man and injuring another apparently by accident, officials said.

U.S. News // 3 hours ago
Claudette to swipe U.S. Atlantic Coast, Canada after drenching Gulf
June 20 (UPI) -- The third tropical storm of the season formed along the Louisiana coast early Saturday, but it could go on to impact much of the eastern U.S. and even Canada before dissipating. 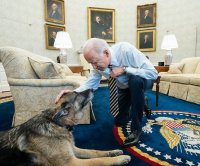