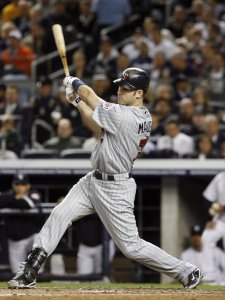 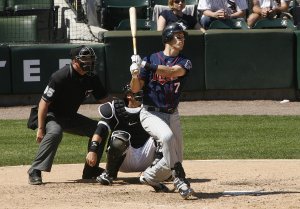 MLB // 2 years ago
Twins' Mauer might end career with series vs. White Sox
Joe Mauer is expected to be in the starting lineup Friday when the Minnesota Twins open up their final series of the 2018 season with a doubleheader against the Chicago White Sox at Target Field.

MLB // 2 years ago
Mauer considers retirement as Twins face Royals
Joe Mauer has been the face of the Minnesota Twins for most of the century.

MLB // 2 years ago
Cubs aim to extend win streak at home vs. Twins
The Chicago Cubs' starting pitchers may not be performing as consistent as they would like, but Joe Maddon's offense is finding ways to make up for it.

My father was getting tired of throwing batting practice to my two older brothers and myself, so he built a portable device that allowed us to practice indoors or outdoors by ourselves

Joseph Patrick Mauer (born April 19, 1983) is a Major League Baseball catcher for the Minnesota Twins. He is the only catcher in Major League history to win three batting titles. He has also won three consecutive Gold Glove awards (2008–2010), and the 2009 AL MVP award.

Mauer played football, basketball, and baseball for Saint Paul's Cretin-Derham Hall Raiders, the high school of Paul Molitor, a member of the Baseball Hall of Fame. In his senior year he became the only athlete ever to be selected as the USA Today High School Player of the Year in two sports (football in 2000 as a quarterback and baseball in 2001 as a catcher).

In December 2009, Sports Illustrated magazine included Mauer in its article on ten "signature" moments in U.S. high-school sports in the 2000–2009 decade, referring to his selection by the Minnesota Twins as the first pick in the 2001 amateur draft.

FULL ARTICLE AT WIKIPEDIA.ORG
This article is licensed under the GNU Free Documentation License.
It uses material from the Wikipedia article "Joe Mauer."
Back to Article
/