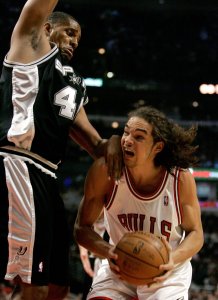 NBA // 2 years ago
L.A. Clippers' high-scoring offense faces Memphis Grizzlies' tough defense
The Memphis Grizzlies hope for a fairer shake from the referees when they seek to avenge an earlier overtime defeat in a rematch with the Los Angeles Clippers.

NBA // 3 years ago
Boston Celtics return home to face New York Knicks
One of the tougher things for an NBA team to do is come off the road after a long trip and play that first game at home.

NBA // 3 years ago
Utah Jazz's Rodney Hood gets ejected, smacks fans phone out of hand
Rodney Hood didn't record any blocks against the Washington Wizards. The Utah Jazz guard saved his swat for a fan's cellphone after he was ejected. 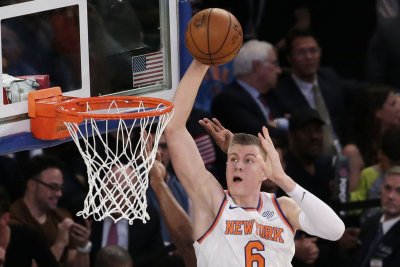 NBA // 3 years ago
New York Knicks rally for road win over New Orleans Pelicans
NEW ORLEANS -- Jarrett Jack made two free throws with 9.1 seconds left and Kristaps Porzingis scored seven of his team-high 30 points in a critical late-game stretch to lift the New York Knicks to a 105-103 victory over the New Orleans Pelicans on Saturday night at the Smoothie King Center.

Joakim Simon Noah (pronounced /ˈdʒoʊ.əkɪm/ or 'JO-a-kim') (born February 25, 1985) is a French-Swedish-American professional basketball player for the Chicago Bulls of the National Basketball Association (NBA). He played college basketball for the University of Florida from 2004 to 2007, and was a key member of the Florida Gators' starting five that won two consecutive NCAA Men's Division I Basketball Tournaments in 2006 and 2007. In 2007, the Chicago Bulls selected Noah in the first round (ninth pick overall) in the 2007 NBA Draft.

He competed on basketball teams for several high schools, first at the United Nations International School (UNIS) in New York City. At UNIS he was coached by Alsonso Shockley, Harry Muniz and David Gartrelle. He reached the championships as the only sophomore on the team. He also played in streetball tournaments and his nickname was "The Noble One" because someone heard that his dad was a pro tennis player. He later transferred to Poly Prep in Brooklyn, New York, where he was coached by Bill McNally, and then to The Lawrenceville School, outside of Princeton, New Jersey.

FULL ARTICLE AT WIKIPEDIA.ORG
This article is licensed under the GNU Free Documentation License.
It uses material from the Wikipedia article "Joakim Noah."
Back to Article
/