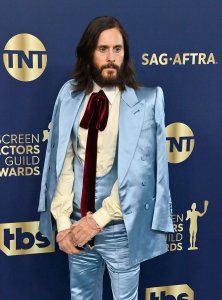 World News // 1 week ago
'Merchant of Death' in proposed prisoner swap a notorious Russian arms dealer
Who exactly is Viktor Bout, the Russian arms dealer offered up in exchange for the release of Americans Brittney Griner and Paul Whelan?

Movies // 2 weeks ago
What to watch: 10 Winona Ryder roles beyond 'Stranger Things'
Teens and tweens who love Winona Ryder as badass middle-aged mom Joyce Beyers on "Stranger Things" might be surprised to learn the 50-year-old actress was the It Girl of the 1980s and '90s.

Entertainment News // 4 months ago
What to stream this weekend: 'Deep Water,' 'WeCrashed'
"Deep Water," "WeCrashed," "An Audience with Adele," "Master," "Human Resources," and "Life and Beth" are some of the entertainment options streaming this weekend.

After meeting all of the wonderful people at COTN and hearing about their enthusiasm for art and music, I invited them to join us in the studio for a day while we make our next record

It didn't mess with my self esteem because I knew it was work. And I looked at it like climbing Mount Everest, or whatever a huge challenge would be for somebody, so I focused on that

I've been making music since I was a little kid

Jared Joseph Leto (born December 26, 1971) is an American actor and musician. His first major acting performance was as Jordan Catalano in the television series My So-Called Life. This led to a film career, including a critically acclaimed portrayal of a drug addict in Requiem for a Dream. Additionally, Leto is the lead vocalist, rhythm guitarist and main songwriter of the rock band 30 Seconds to Mars.

Leto was born on December 26, 1971 in Bossier City, Louisiana. During his childhood, Leto and his family—his mother, Constance, and his older brother Shannon Leto—moved frequently, living in Louisiana, Wyoming, Colorado, Virginia, and even Haiti.

After dropping out briefly in the 10th grade, Jared decided to return and focus on his education at Flint Hill School in Oakton, Virginia. He graduated from Emerson Preparatory School in Washington, DC in 1989. When he finished school, Leto enrolled at Philadelphia's University of the Arts to pursue his interests in painting. However, he then transferred to New York City's School of Visual Arts after developing an interest in acting.

FULL ARTICLE AT WIKIPEDIA.ORG
This article is licensed under the GNU Free Documentation License.
It uses material from the Wikipedia article "Jared Leto."