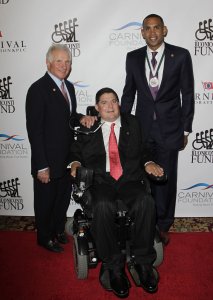 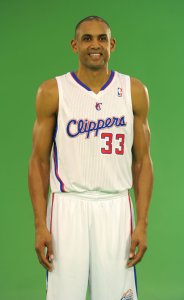 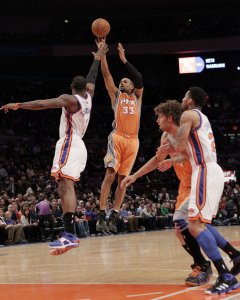 NBA // 1 year ago
Dwyane Wade buys ownership stake in Utah Jazz
Dwyane Wade became the latest NBA legend to take an ownership role of an NBA franchise Friday, with a minority stake purchase in the Utah Jazz, the team announced.

Odd News // 4 years ago
Escaped bison wander through Ohio neighborhood
A herd of six bison escaped from a farm in Ohio and drew attention when they roamed through back yards in a residential neighborhood.

NBA // 5 years ago
Miami Heat send Chris Bosh to...NBA on TNT
One NBA player was dealt Thursday, but it wasn't to another team.

If surgery will be required, it won't be the same procedure or the same length of time that there was before

If surgery will be required, it won't be the same procedure or the same length of time that there was before

Grant Henry Hill (born October 5, 1972) is an American professional basketball player who currently plays for the Phoenix Suns. As a collegian with Duke University and early in his professional career with the Detroit Pistons, Hill was considered one of the best all-around players in the game, often leading his team in points, rebounds and assists. His time in the league has been hampered by career-threatening injuries, notably towards the prime of his career.

Grant Hill was born in Dallas, Texas. His father, Calvin Hill, graduated from Yale University with a degree in history, later attended Southern Methodist University and was a three-time All-Pro running back for the National Football League's Dallas Cowboys, winning the Offensive Rookie of the Year Award in 1969. His mother, Janet, is a Wellesley College graduate. After his father's NFL career ended, the family settled in Reston, Virginia, where Grant became a high-school superstar at South Lakes High School and he was selected for the 1990 McDonald's All-American Team.

When the time came to choose a college, Hill's mother states in the Fox Sports Beyond the Glory documentary about Hill's career that she wanted him to attend Georgetown University, while his father preferred the University of North Carolina. Hill chose a neutral path and decided to attend Duke University. Hill played four years with the Duke Blue Devils, winning national titles in 1991 and 1992, where Duke became the first Division I program to win consecutive titles since UCLA in 1973. Despite losing two of the biggest contributors on the Blue Devils, Christian Laettner (in 1992) and Bobby Hurley (who went on to play in the NBA), Hill led Duke to the championship game once again in 1994, but ended up losing to Arkansas Razorbacks. Hill won the Henry Iba Corinthian Award as the nation's top defensive player in 1993, and in 1994 he was the ACC Player Of the Year. During his collegiate career, Hill became the first player in ACC history to collect more than 1,900 points, 700 rebounds, 400 assists, 200 steals, and 100 blocked shots. As a result of his successful college career, he became the 8th player in Duke history to have his jersey number (33) retired. After his freshman season at Duke, Hill played on the bronze-winning U.S. team at the 1991 Pan American Games, held in Havana, Cuba.

FULL ARTICLE AT WIKIPEDIA.ORG
This article is licensed under the GNU Free Documentation License.
It uses material from the Wikipedia article "Grant Hill."