Belichick and former NFL running back Herschel Walker will join the council, according to a White House statement released Friday. They will serve for a term of two years.

The council also includes Johnny Damon, Lou Ferrigno, Dr. Oz and many others.

RELATED Tom Brady 'pleads the fifth' on being appreciated by Patriots' Belichick, Kraft

Patriots owner Robert Kraft and Trump are longtime friends. Kraft also contributed to Trump's presidential campaign in the 2016 election. Belichick is also longtime friends. The Patriots coach was asked about the nature of their relationship after Trump read a supportive letter from Belichick at a rally on election day.

"I've received a number of inquiries relative to a note that I wrote to Donald on Monday," Belichick told reporters in 2016. "Our friendship goes back many years and I think anybody that's spent more than five minutes with me knows I'm not a political person. The comments are not politically motivated. I have a friendship and loyalty to Donald."

In October, Kraft was critical of Trump's stance regarding players kneeling during the national anthem before football games.

RELATED Rob Gronkowski is officially playing for the Patriots in 2018

"The problem we have is, we have a president who will use that as fodder to do his mission that I don't feel is in the best interests of America," Kraft said, according to audio obtained by the New York Times.

"It's divisive and it's horrible." 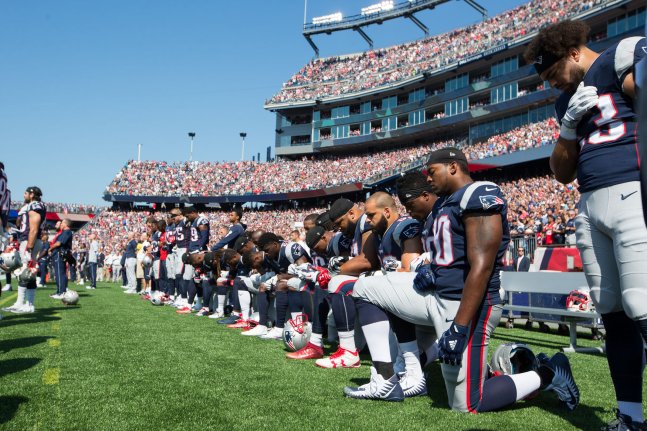 Numerous New England Patriots players take a knee during the national anthem prior to a game against the Houston Texans on September 24 at Gillette Stadium in Foxborough, Mass. Photo by Matthew Healey/ UPI

Belichick released a statement in September after Patriots players were kneeling and locking arms before a game.

"I have immense respect and admiration for our players, for how they conduct themselves professionally as New England Patriots and for how they represent themselves, their families and community as men," the statement said. "I have coached football for over four decades and one of the greatest things about being in this environment is the diversity of people, backgrounds, viewpoints and relationships we are fortunate to experience."

"As with any large group of people, there is a variety of perspectives and opinions on many topics. Discussions occur between myself, individual players, groups and the entire team on an ongoing basis. They concern the team and other issues surrounding the team. I am going to keep the specifics of those conversations private. I will do what I feel is best for the team in my role as head coach and collectively, we will work together to find the best way to proceed."

NFL // 3 days ago
49ers 'content' with QBs Purdy, Lance; won't re-sign Garoppolo, coach says
Feb. 2 (UPI) -- The San Francisco 49ers are "content" with Brock Purdy and Trey Lance as the top quarterbacks on their roster and will not bring back Jimmy Garoppolo next season, coach Kyle Shanahan told reporters.

NFL // 5 days ago
Bengals' Pratt regrets yelling at teammate Ossai for penalty vs. Chiefs
Jan. 31 (UPI) -- Linebacker Germaine Pratt told reporters that he was "wrong" for screaming at teammate Joseph Ossai for the role his penalty played in the Cincinnati Bengals' loss to the Kansas City Chiefs in the AFC title game.
Advertisement