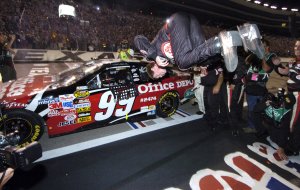 MLB // 9 months ago
Players from all 30 MLB teams to compete in virtual league
A player from each of Major League Baseball's 30 teams will compete in a virtual league on "MLB The Show" to help raise money for the Boys & Girls Club of America and Canada during the coronavirus pandemic.

MLB // 2 years ago
Series finale crucial for both Chicago Cubs, Milwaukee Brewers
A night after Jose Quintana shut Milwaukee down, Kyle Hendricks and the Chicago Cubs will face the Brewers on Wednesday in a crucial series finale.

MLB // 3 years ago
NLCS Game 5 preview: Chicago Cubs must overcome Clayton Kershaw to stay alive
CHICAGO -- For the first time in almost three weeks, the Los Angeles Dodgers will try to bounce back from a loss.

MLB // 3 years ago
NLDS: Strasburg, Taylor help Washington Nationals force Game 5 vs. Cubs
CHICAGO -- Stephen Strasburg threw seven scoreless innings and struck out 12 and Michael A. Taylor hit an eighth-inning grand slam to draw the Washington Nationals even at two games apiece in the National League Division Series with a 5-0 victory over the Chicago Cubs on Wednesday.

Kyle is very good on restarts, and I knew he was going to hang back and get the run on my bumper like he did to Jimmie (Johnson) at Chicagoland

I'd like to be really mad at Mark, but Mark's a heck of a guy, he's a guy we all look up to, I'm sure he just made a mistake

I know Kyle has almost clinched the championship, but we came here to win the race

Edwards' big break came in 2001, when he competed in 7 NASCAR Craftsman Truck Series events for MB Motorsports. His best finish in the seven races was 8th at Kansas Speedway. He also ran one Busch Series race for Bost Motorsports, finishing 38th at Gateway International Raceway. However, it was enough to impress Jack Roush, and Edwards became a full-time Truck Series competitor in 2003, driving the #99 Ford F-150 sponsored by Superchips. He won Rookie-of-the-Year honors in addition, to three race wins, eventually finishing 8th in the points standings at the end of the season. In 2004, he notched three more race wins, including the season-opening Florida Dodge Dealers 250 at the Daytona International Speedway. At season's end, Edwards finished 4th in the points. In August 2004, he made his NEXTEL Cup Series debut, replacing Jeff Burton, who left the team, in the No. 99 Ford Taurus for Roush Racing, at the Michigan International Speedway. He finished 10th. He drove the #99 Ford for the remainder of the 2004 NEXTEL Cup. He also once again ran one Busch Series race; this time for Bobby Benton's RAB Racing team at Bristol Motor Speedway with sponsorship from Mac Tools.

In 2005, Edwards became a full-time driver in both the NEXTEL Cup and Busch Series. He has already won races in each, and he made history in the process of winning. On March 19, 2005, Edwards won the Aaron's 312 at the Atlanta Motor Speedway in Hampton, Georgia, recording his first Busch Series win. The next day, he beat Jimmie Johnson by 2-hundredths of a second to win the Golden Corral 500 at the same track for his first NEXTEL Cup Series win. Until this took place, no driver had ever won both the Busch and NEXTEL Cup Series races in the same weekend at Atlanta, although the feat had been pulled off numerous times before at other tracks by other drivers. Also, Edwards became the first driver in NASCAR history to pick up his first career Busch and NEXTEL Cup Series wins in the same weekend, and became the eleventh driver in NASCAR history to win races in all three of the organization's major racing series.

FULL ARTICLE AT WIKIPEDIA.ORG
This article is licensed under the GNU Free Documentation License.
It uses material from the Wikipedia article "Carl Edwards."
Back to Article
/