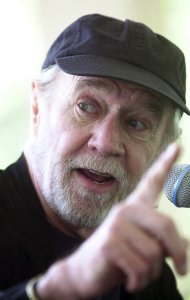 Entertainment News // 4 years ago
Dan Aykroyd and others to honor Bill Murray at Mark Twain award ceremony
Bill Murray will be honored with the Mark Twain Prize for American Humor in an upcoming PBS special featuring Dan Aykroyd, Bill Hader, and Sigourney Weaver.

Entertainment News // 4 years ago
Kevin Smith declares Pope Francis a 'very hip cat' for his 'impressive and progressive' views
"Dogma" writer-director Kevin Smith, one of Hollywood's most prominent Catholics, has nothing but high praise for Pope Francis.

Health News // 4 years ago
Changes in sense of humor may be early sign of dementia
Researchers found changes to what people find funny may indicate specific types of dementia years before other symptoms become apparent.

His comedy took on privilege and elitism, even railing against the game of golf. He never lost that fire. May he continue to inspire young people never to accept the status quo

En La Orilla Del Mundo (At the Edge of the World)

Carlin was noted for his black humor as well as his thoughts on politics, the English language, psychology, religion, and various taboo subjects. Carlin and his "Seven Dirty Words" comedy routine were central to the 1978 U.S. Supreme Court case F.C.C. v. Pacifica Foundation, in which a narrow 5–4 decision by the justices affirmed the government's power to regulate indecent material on the public airwaves.

The first of his fourteen stand-up comedy specials for HBO was filmed in 1977. In the 1990s and 2000s, Carlin's routines focused on socio-cultural criticism of modern American society. He often commented on contemporary political issues in the United States and satirized the excesses of American culture. His final HBO special, It's Bad for Ya, was filmed less than four months before his death.

FULL ARTICLE AT WIKIPEDIA.ORG
This article is licensed under the GNU Free Documentation License.
It uses material from the Wikipedia article "George Carlin."
Back to Article
/