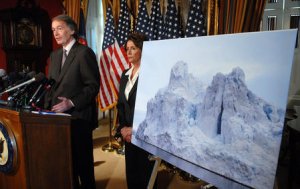 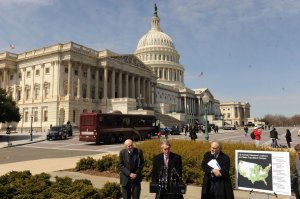 U.S. News // 7 months ago
EPA chief defends lifting of regulations during pandemic
Environmental Protection Agency Administrator Andrew Wheeler testified to Congress on Wednesday about the regulations his agency has lifted in recent weeks.

U.S. News // 1 year ago
Senators introduce resolution stressing Congress has not authorized war with Iran
Senators have introduced a bipartisan resolution underscoring that President Donald Trump does not have congressional authorization to pursue military action against Iran.

U.S. News // 1 year ago
Senate stymies Green New Deal as Democrats protest 'sham' vote
The Senate on Tuesday blocked the Green New Deal, voting 57-0 against the Democratic proposal that aims to wean the United States off fossil fuels in 11 years.

We will create jobs by the millions, save money by the billions and unleash energy investment by the trillions

Not since President Kennedy named MIT's Jerome B. Wiesner to serve as his science adviser has a presidential appointment reflected the importance of harnessing the talents and energies of our nation's most brilliant scientists and engineers to transform national policy

After eight years, President Bush and Dick Cheney have turned the GOP into the 'Gas and Oil Party,

Edward John "Ed" Markey (born July 11, 1946) is the U.S. Representative for Massachusetts's 7th congressional district, serving since 1976. He is a member of the Democratic Party. The district includes most of Boston's northern and western suburbs, such as Medford and Framingham. Markey is the Dean of both the Massachusetts and New England House delegations. He is the second-longest serving member of Congress from New England, behind Senator Patrick Leahy of Vermont.

Markey was born and raised in Malden, Massachusetts. He graduated from Boston College and Boston College Law School. He worked as an attorney and served in the United States Army Reserve for five years before being elected to the Massachusetts House of Representatives, where he served two terms as a state representative. In 1976 he won a crowded special election to succeed deceased incumbent Torbert Macdonald, and took office in November 1976.

In the U.S. House, Markey is a Progressive representative who has made energy policy his top priority. He sits on several energy committees and subcommittees, and is the former chairman of the Select Committee on Energy Independence and Global Warming.

FULL ARTICLE AT WIKIPEDIA.ORG
This article is licensed under the GNU Free Documentation License.
It uses material from the Wikipedia article "Edward Markey."
Back to Article
/