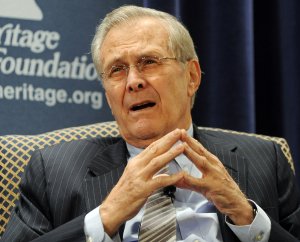 U.S. News // 3 months ago
10 ex-U.S. defense chiefs warn Pentagon against interfering in election
Ten former Pentagon chiefs on Sunday declared the election over and warned the Trump administration's Defense Department that military intervention would not only violate the Constitution but also result in prosecution.

U.S. News // 1 year ago
Trump nominates controversial Kentucky judge for D.C. court
President Donald Trump on Friday nominated Justin Walker, a Kentucky judge who was a controversial pick for the federal bench when he was appointed on a party-line vote five months ago, for a seat in Washington, D.C.

U.S. News // 1 year ago
Report on Afghanistan war deceit prompts anger, call for congressional hearing
A Washington Post report stating senior U.S. officials knowingly misled the public about the progress of the Afghan war prompted outrage and a call for a congressional hearing on Monday.

Voices // 1 year ago
Sea level rise could displace millions within two generations
Antarctica is further from civilization than any other place on Earth. The Greenland ice sheet is closer to home but around one-tenth the size of its southern sibling.

Defense News // 3 years ago
Norquist reassures Congress that Pentagon audit will be exhaustive
The House Armed Services Committee on Wednesday applauded the Department of Defense for their willing participation in its first ever service-wide audit.

We must achieve: fundamentally joint, network-centric, distributed forces capable of rapid decision superiority and massed effects across the battlespace

You are running a story based off of selective quotations and gross mischaracterizations from a handful of memos -- carefully picked from the some 20,000 written while Rumsfeld served as secretary

I know that I would not engage in a coverup

Donald Henry Rumsfeld (born July 9, 1932) is an American government official, Republican politician and businessman who served as the 13th Secretary of Defense from 1975 to 1977, under President Gerald Ford, and as the 21st Secretary of Defense from 2001 to 2006, under President George W. Bush. He is both the youngest (at 43 years old) and the oldest person (at 74 years old) to have served as Secretary of Defense, as well as the only person to have served in the position for two non-consecutive terms. Combined, he is the second longest-serving defense secretary after Robert McNamara.

Rumsfeld was White House Chief of Staff during part of the Ford Administration and also served in various positions in the Nixon Administration. He was elected to four terms in the United States House of Representatives, and served as the United States Permanent Representative to NATO. He was president of G. D. Searle & Company from 1977–1985, CEO of General Instrument from 1990–1993, and chairman of Gilead Sciences from 1997-2001. Rumsfeld is one of the key people responsible for the restructuring of the military after 2001, for designing the national response to the 9-11 attacks, and for taking charge of the wars against Afghanistan (2001-present) and Irag (2003-2010), including the controversial treatment of prisoners. At first highly popular with the media for his outspokenness, he lost political support as the wars in Iraq and Afghanistan dragged on and was forced to retire immediately after the 2006 election.

Donald Henry Rumsfeld was born on July 9, 1932, in Evanston, Illinois, to George Donald Rumsfeld and Jeannette (née Huster). His great-grandfather, Johann Heinrich Rumsfeld, emigrated from Weyhe near Bremen in Northern Germany in 1876. Growing up in Winnetka, Illinois, Rumsfeld became an Eagle Scout in 1949 and is the recipient of both the Distinguished Eagle Scout Award from the Boy Scouts of America and its Silver Buffalo Award in 2006. He was a camp counselor at the Northeast Illinois Council's Camp Ma-Ka-Ja-Wan in the late 1940s and a ranger at Philmont Scout Ranch in 1949. Rumsfeld later bought a vacation house 30 miles (48 km) west of Philmont at Taos, New Mexico.

FULL ARTICLE AT WIKIPEDIA.ORG
This article is licensed under the GNU Free Documentation License.
It uses material from the Wikipedia article "Donald Rumsfeld."
Back to Article
/