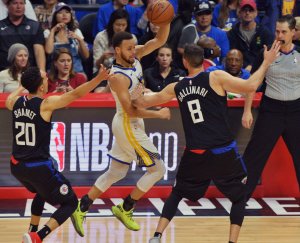 NBA // 5 months ago
Giannis-less Bucks top Hawks in Game 5 for 3-2 series lead
The Milwaukee Bucks overcame the absence of star forward Giannis Antetokounmpo and beat the Atlanta Hawks 123-112 on Thursday night at Fiserv Forum to grab a 3-2 lead in the NBA Eastern Conference Finals.

NBA // 5 months ago
Clutch Khris Middleton leads Bucks to Game 3 win vs. Hawks
Khris Middleton scored 20 of his game-high 38 points in the fourth quarter to lead the Milwaukee Bucks to a Game 3 win over the Atlanta Hawks and a 2-1 edge in the NBA's Eastern Conference Finals.

NBA // 1 year ago
Thunder force Game 7 with win over Rockets
Chris Paul scored 15 points in the fourth quarter to help the Oklahoma City Thunder beat the Houston Rockets in Game 6 of their first-round Western Conference playoff series to force a decisive Game 7 in Orlando, Fla.

Danilo Gallinari (born August 8, 1988 in Sant'Angelo Lodigiano) is an Italian professional basketball player with the Denver Nuggets of the NBA. He is 2.08 m (6 ft 10 in) in height and 102.1 kg (225 lbs) in weight. He plays mainly at the small forward position.

Danilo Gallinari began playing professionally at age 15 in 2004 for Casalpusterlengo, a team in the Italian B1 League.

FULL ARTICLE AT WIKIPEDIA.ORG
This article is licensed under the GNU Free Documentation License.
It uses material from the Wikipedia article "Danilo Gallinari."