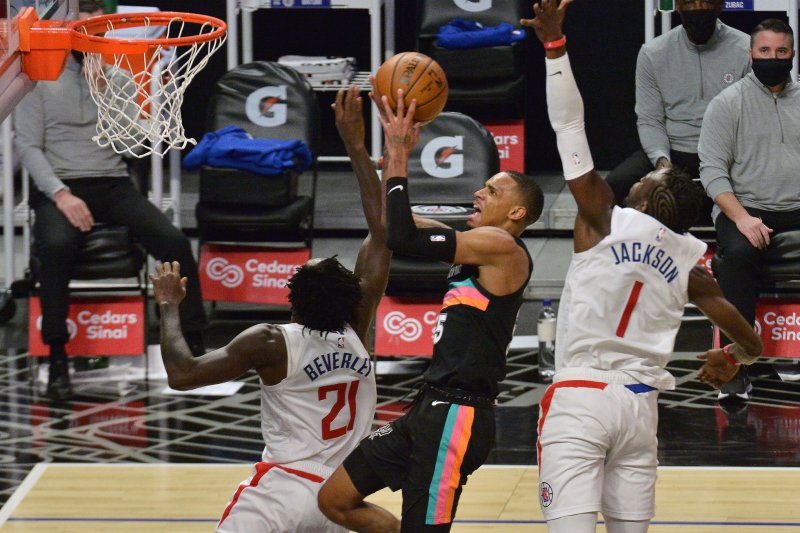 The San Antonio Spurs agreed to trade guard Dejounte Murray (C) to the Atlanta Hawks on Wednesday in exchange for three draft picks and a swap of additional selections. File Photo by Jim Ruymen/UPI | License Photo

Young also included a photo of himself as he stood next to Murray while at the NBA All-Star Game.

Sources told ESPN, The Athletic and CBS on Wednesday that the Hawks agreed to trade forward Danilo Gallinari and three first-round NBA Draft picks to the Spurs in exchange for Murray.

The trade will also include a pick swap between the teams for the 2026 NBA Draft.

"San Antonio, I love you forever," Murray wrote Wednesday on social media. "Thank You Spurs and the whole city for believing in me and embracing me from day one.

"I want to write a whole book, but it's not easy. We are family and it's always going to be bigger than basketball!"

NBA // 1 day ago
Nets owner supports staff amid Kevin Durant trade demand
Aug. 9 (UPI) -- Brooklyn Nets owner Joe Tsai voiced support for the team's front office and coaching staff amid trade demands from Kevin Durant and a reported ultimatum the star player issued in order for him to stay with the team.