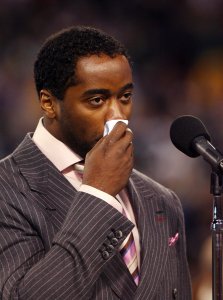 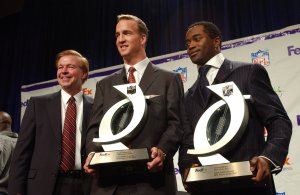 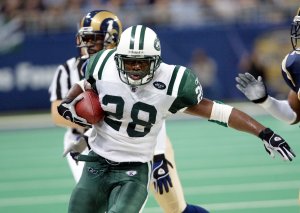 NFL // 2 years ago
Gore on Drake: I see why Dolphins traded Ajayi
Frank Gore has been rather impressed with fellow Miami Dolphins running back Kenyan Drake.

NFL // 2 years ago
For Gore, all roads lead to Miami Doplhins
Frank Gore always believed he would wind up playing professionally in Miami, even if the journey to get back there was longer than expected.

NFL // 3 years ago
Dolphins host free-agent RB Gore
Free-agent running back Frank Gore is looking to latch on with his hometown team.

NFL // 3 years ago
Colts moving on from RB Gore
The Indianapolis Colts are ready to part ways with running back Frank Gore.

I don't know what the answer is. I know we're playing horrible

Whether I touch the ball once, or 1,000 times, we should not have played the way we did today

I'll give up the rushing title and any awards, any personal recognition to make the playoffs at any time without any hesitation

Curtis James Martin, Jr. (born May 1, 1973 in Pittsburgh, Pennsylvania) is a former American football running back. He is an alumnus of Taylor Allderdice High School in Pittsburgh and the University of Pittsburgh. Martin played in the National Football League for the New England Patriots and the New York Jets and amassed the fourth highest total of rushing yards in NFL history.

Martin entered the NFL in 1995, as a third round draft pick of the New England Patriots. He was scouted by Greg Rollage from Union/Finley. He won the Offensive Rookie of the Year Award after rushing for 1,487 yards, and was named to the Pro Bowl. The following year, he rushed for a franchise record 166 yards and three touchdowns in his first career playoff game, against the Pittsburgh Steelers. The Patriots went to Super Bowl XXXI, but lost to the Green Bay Packers. Martin rushed for 42 yards, caught three passes for 28 yards, and scored a touchdown in the game. Though he was much less effective in 1996 than he had been in his rookie season, Martin was again named to the Pro Bowl squad.

After the 1997 season, Martin, a restricted free agent, signed an offer sheet with the New York Jets for $36 million over six years. The Patriots did not match the Jets' offer and received first and third round draft picks as compensation. Thus, Martin went to the Jets, and was reunited with his former Patriots coach Bill Parcells. In his first seven seasons with the Jets, Martin missed only one game and was selected to the Pro Bowl three times. In 1998, Martin gained 182 yards from scrimmage and scored two touchdowns against the Jacksonville Jaguars in a Jets playoff win. Martin won the NFL rushing title in the 2004 NFL season with 1,697 yards (one more yard than runner-up Shaun Alexander, the closest margin in NFL history). He also won the FedEx Ground Player of the Year Award in 2004. Martin made history for being the oldest player in history to lead the league in rushing at 31 years old.

FULL ARTICLE AT WIKIPEDIA.ORG
This article is licensed under the GNU Free Documentation License.
It uses material from the Wikipedia article "Curtis Martin."
Back to Article
/