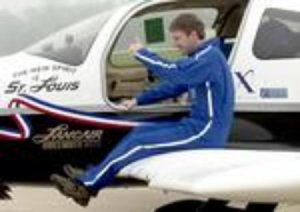 Voices // 1 year ago
The wrong '-isms' are the enemy
Republicans and Democrats are weaponizing "socialism" and "capitalism" -- and sending them into political battle. The nation as a whole will be the loser.

Top News // 3 years ago
On This Day: Reagan sworn in as California governor
On Jan. 2, 1967, Ronald Reagan is sworn in as 33rd governor of California.

Top News // 3 years ago
The Almanac
On April 2, 1932, aviator Charles Lindbergh left $50,000 in a New York City cemetery for the return of his kidnapped son. The child was later found dead.

The American Axis: Henry Ford, Charles Lindbergh and the Rise of the Third Reic

I am making this flight to honor my grandfather's legacy and to promote the X PRIZE competition, which I believe to be the catalyst for the future of space travel

Lindbergh, then a 25-year-old U.S. Air Mail pilot, emerged from virtual obscurity to almost instantaneous world fame as the result of his Orteig Prize-winning solo non-stop flight on May 20–21, 1927, from Roosevelt Field located in Garden City on New York's Long Island to Le Bourget Field in Paris, France, a distance of nearly 3,600 statute miles (5,800 km), in the single-seat, single-engine monoplane Spirit of St. Louis. Lindbergh, a U.S. Army reserve officer, was also awarded the nation's highest military decoration, the Medal of Honor, for his historic exploit.

In the late 1920s and early 1930s, Lindbergh relentlessly used his fame to help promote the rapid development of U.S. commercial aviation. In March 1932, however, his infant son, Charles, Jr., was kidnapped and murdered in what was soon dubbed the "Crime of the Century" which eventually led to the Lindbergh family fleeing the United States in December 1935 to live in Europe where they remained until the surprise attack on Pearl Harbor by the Imperial Japanese Navy. Before the United States formally entered World War II by declaring war on Japan on December 8, 1941, Lindbergh had been an outspoken advocate of keeping the U.S. out of the world conflict, as was his Congressman father, Charles August Lindbergh (R-MN), during World War I, and became a leader of the anti-war America First movement. Nonetheless, he supported the war effort after Pearl Harbor and flew many combat missions in the Pacific Theater of World War II as a civilian consultant, even though President Franklin D. Roosevelt had refused to reinstate his Army Air Corps colonel's commission that he had resigned in April 1941.

FULL ARTICLE AT WIKIPEDIA.ORG
This article is licensed under the GNU Free Documentation License.
It uses material from the Wikipedia article "Charles Lindbergh."
Back to Article
/