On This Day: Reagan sworn in as California governor

Former California Gov. Ronald Reagan is on his third campaign tour through New Hampshire discovers on January 28, 1976. On January 2, 1967, Reagan was sworn in as 33rd governor of California. File Photo by Leighton Mark/UPI | License Photo

Motorists making their way east down the Vandeventer overpass on Highway 40 go slow as one and a half inches of snow fall on the area January 7, 1999. On January 2, 1974, U.S. President Richard Nixon signed a bill requiring states to limit highway speeds to 55 mph or lose federal highway funds. File Photo by Bill Greenblatt/UPI | License Photo

British Prince Harry takes part of in an exercise with U.S. military cadets on a firing range at the United States Military Academy in West Point, NY., on June 25, 2010. On January 2, 2011, Prince Harry was sent home from military service in Afghanistan after a magazine revealed his presence in the war zone. File Photo by Emmanuel Dunand/Pool | License Photo

In 1788, Georgia ratified the Constitution, the fourth of the original 13 colonies to do so, and was admitted to the Union.

In 1959, the Soviet Union launched Luna 1, the first unmanned spacecraft to travel to the moon.

In 1967, Ronald Reagan is sworn in as 33rd governor of California.

In 1981, police in Britain arrested the so-called "Yorkshire Ripper," after five years on the run. Peter Sutcliffe was convicted of murdering 13 women and attempting to murder seven more.

In 1990, Britain's most-wanted terrorism suspect, Patrick Sheehy, was found dead in the Republic of Ireland.

In 2006, 12 men were killed in a methane gas explosion in a coal mine in West Virginia's Upshur County. One man was found alive after 41 hours trapped underground.

In 2009, in a tight runoff after an even tighter general election, John Atta Mills was elected president of Ghana with 50.2 percent of the vote, edging Nana Akufo-Addo.

In 2011, Prince Harry, grandson of England's Queen Elizabeth II, was sent home from military service in Afghanistan after a magazine revealed his presence in the war zone. He later returned to continue training as a gunship pilot.

In 2014, fifty-two passengers stranded 10 days on an icebound Russian ship in Antarctica were picked up in small groups by a Chinese helicopter and flown to safety.

World News // 59 minutes ago
Former Vatican bank chief sentenced to 9 years for embezzlement
Jan. 22 (UPI) -- The former head of the Vatican bank was sentenced to almost nine years in prison for money laundering and a real estate embezzlement scheme during the pontificates of Pope John Paul II and Pope Benedict.

World News // 2 hours ago
British court sends 4 to prison for 2019 lorry deaths of 39 migrants
Jan. 22 (UPI) -- A British court on Friday sentenced four people to prison, including the ringleaders of a human trafficking operation, for the deaths of 39 Vietnamese migrants who died after being smuggled into Britain in 2019. 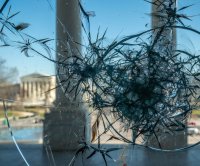 U.S. News // 3 hours ago
Prosecutors: Accused Capitol rioter eluded police and went to D.C. for inauguration
Jan. 22 (UPI) -- A Florida man accused of participating in the attack on the U.S. Capitol this month was arrested after officials say he avoided police and traveled to Washington, D.C., on the day President Joe Biden was inaugurated.

U.S. News // 12 hours ago
House to transmit article of Trump impeachment to Senate on Monday
Jan. 22 (UPI) -- The House will deliver an article of impeachment against former President Donald Trump to the Senate for trial on Monday, Democratic leader Charles Schumer said Friday.