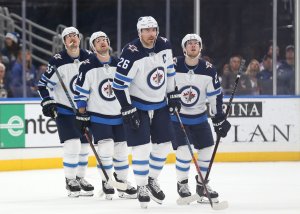 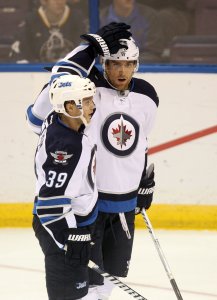 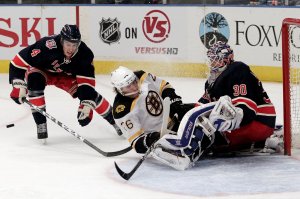 NHL // 3 years ago
Jets' Mark Scheifele bats puck out of air for wild goal
Winnipeg Jets center Mark Scheifele scored a sensational goal in a 7-4 win against the Colorado Avalanche.

NHL // 3 years ago
Surging Sharks return home to face Jets
Now that the San Jose Sharks appear to have conquered their demons on the road, they'll try to continue that momentum at home against one of the Western Conference's best teams.

Blake James Wheeler (born August 31, 1986) is an American professional ice hockey right winger currently playing for the Atlanta Thrashers of the National Hockey League (NHL). He was drafted by the Phoenix Coyotes in the first round, fifth overall, in the 2004 NHL Entry Draft.

Wheeler attended Breck School his freshman year through his junior year. There, during his junior year, Wheeler had his breakout season, putting up a state-high 45 goals and 55 assists in 2003–04. He led his team to a Class A State Hockey Championship that season, and scored a hat trick in the final game.

Wheeler opted to forego his senior year to play in the United States Hockey League (USHL) with the Green Bay Gamblers. After playing one season with the Gamblers, Wheeler attended the University of Minnesota. In 2005–06, his freshman year with the Minnesota Golden Gophers, he recorded 23 points in 39 games, playing alongside future Boston Bruins teammate Phil Kessel. Wheeler is praised for his deceptive speed with his large body frame, and his ability to stick handle at such high speeds.

FULL ARTICLE AT WIKIPEDIA.ORG
This article is licensed under the GNU Free Documentation License.
It uses material from the Wikipedia article "Blake Wheeler."