Winnipeg Jets forward Blake Wheeler skates to the bench after scoring a goal while teammates watch the replay against the St. Louis Blues in the first period on November 24 at the Enterprise Center in St. Louis. Wheeler scored a goal in the Jets' overtime win on Sunday. Photo by Bill Greenblatt/UPI | License Photo

Jan. 13 (UPI) -- The Winnipeg Jets overcame an early two-goal deficit and rallied for a 4-3 overtime victory against the Anaheim Ducks on Sunday night at Bell MTS Place.

Winnipeg (29-14-2) faced a 2-0 hole in the first period but picked up its fourth win in the last five games to reclaim the top position in the Central Division.

Anaheim used goals from Brian Gibbons and Rickard Rakell to grab a 2-0 advantage 16:14 into the first period.

Jets winger Blake Wheeler scored on the power play before the end of the first period to cut the Ducks' lead to 2-1.

Patrik Laine, who played in his 200th career NHL game, tied the contest at 2-2 with his team-best 25th goal of the season.

Ducks forward Andrew Cogliano put Anaheim ahead 3-2 with a score late in the second period after beating Winnipeg goalie Connor Hellebuyck from close to the right circle.

Ben Chiarot evened the score 14:05 into the third period to send the game into overtime.

Jets center Bryan Little roofed a rebound and scored with 11 seconds remaining in the extra frame to seal the win.

Ducks goaltender John Gibson made 30 saves and Hellebuyck stopped 28 out of 31 shots. 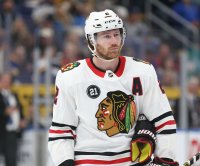