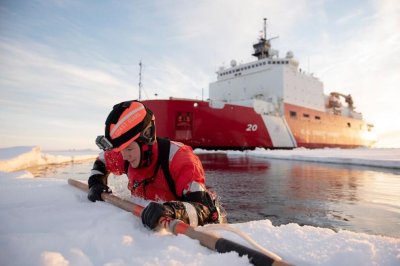 Defense News // 8 months ago
Fire on Coast Guard icebreaker Healy ends Arctic scientific mission
The icebreaker USCGC Healy had an engine room electrical while fire off the coast of Alaska, and headed to Seattle, the U.S. Coast Guard said.

And we're looking at the area's climate history to understand how the ocean and the atmosphere affected the land, and what happened to the water masses in the region when the land bridge was submerged

The Bering Strait (Russian: Берингов пролив, Beringov proliv), known to natives as Imakpik, is a sea strait between Cape Dezhnev, Chukotka Autonomous Okrug, Russia, the easternmost point (169°43'W) of the Asian continent and Cape Prince of Wales, Alaska, USA, the westernmost point (168°05'W) of the North American continent, with latitude of about 65°40'N, slightly south of the polar circle. The present US-Russia boundary in the strait, agreed to only by the USA, is 168°58'37"W. The name of this sea is sometimes spelled Behring in older books.

The Bering Strait has been the subject of scientific speculation that humans migrated from Asia to North America across a land bridge at a time when lower ocean levels–perhaps a result of glaciers locking up vast amounts of water–exposed a ridge beneath the ocean. This would have allowed humans to walk from Siberia to Alaska, thus populating North and South America (see History of the Americas).

FULL ARTICLE AT WIKIPEDIA.ORG
This article is licensed under the GNU Free Documentation License.
It uses material from the Wikipedia article "Bering Strait."
Back to Article
/