Biofluorescent fish documented in the Arctic for the first time 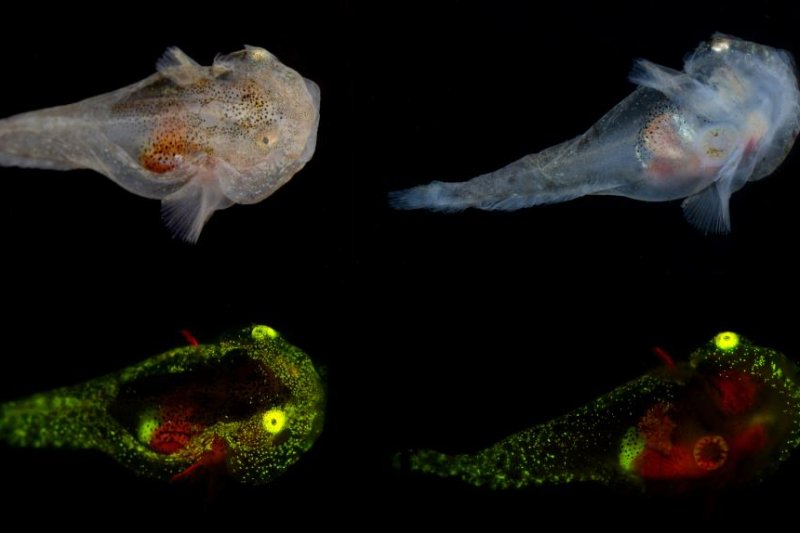 Researchers David Gruber, on the left, and John Sparks, pictured right, traveled to iceberg habitat off the coast of eastern Greenland to search for biofluorescent fish. Photo by P. Kragh/AMNH

March 18 (UPI) -- For the first time, scientists have documented biofluorescent fish in the Arctic. Researchers spotted snailfish glowing red and green in the icy waters off the coast of Greenland.

Most biofluorescent fish are found in tropical waters where the supply of daytime sunlight is more consistent.

Solar energy is a necessary ingredient for biofluorescence. Glow-in-the-dark fish get their shine by converting blue wavelengths into green, red or yellow light.

At the poles, daylight varies with the seasons, making biofluorescence more difficult. During the heart of the winter in the Arctic, the sun disappears entirely for several weeks. But during the summer, the days are filled with sun.

The authors the latest study hypothesized that the Arctic's long summer days might inspire biofluorescence. They were correct -- but so were assumptions about the scarcity of polar biofluorescence.

"Overall, we found marine fluorescence to be quite rare in the Arctic, in both invertebrate and vertebrate lineages," study author John Sparks said in a press release.

"So we were surprised to find these juvenile snailfish brightly fluorescing in not just one, but two different colors, which is very unusual in a single species," said Sparks, a curator in the American Museum of Natural History's Department of Ichthyology.

In 2019, Sparks and a group of marine biologists boarded a research vessel and head for a group of icebergs off the coast of Eastern Greenland.

The researchers found no evidence of biofluorescence among fish species known to glow in the dark in the tropics, including scorpionfishes and flatfishes.

However, the scientists did spot two juvenile specimens of variegated snailfish, Liparis gibbus, glowing both red and green.

The newly published study also includes reports of an adult kelp snailfish, L. tunicatus, observed glowing red in the Bering Strait off the coast of Alaska.

biofluorescence appears to be used primarily for communication purposes, but since its discovery among a diversity of fish species, scientists have documented the quality in platypuses, opossums, flying squirrels, springhares and marine turtles.

Its presence across a diversity of lineages suggests biofluorescence may serve multiple purposes.

"We are now focusing our efforts on determining the function of fluorescence in various fish groups, including catsharks, where we have shown that bright green fluorescence enhances contrast in their pigmentation pattern, making it easier for individuals to see each other at depth," Sparks said.

Science News // 22 hours ago
High-stakes Boeing capsule launch postponed due to mishap at space station
ORLANDO, Fla., July 29 (UPI) -- Boeing and NASA postponed the launch the company's Starliner space capsule to the International Space Station on Friday after a mishap at the orbital laboratory on Thursday.