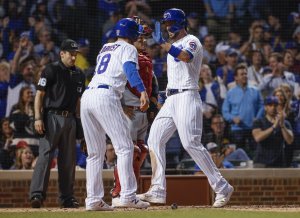 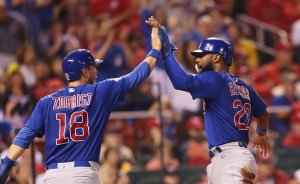 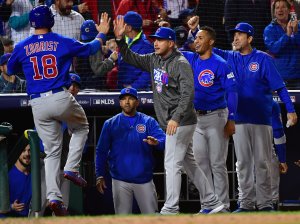 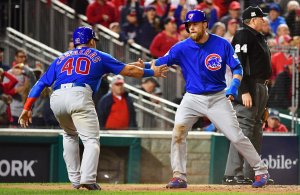 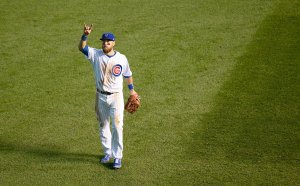 MLB // 3 years ago
Cubs' Ben Zobrist away from team amid divorce
Chicago Cubs veteran second baseman Ben Zobrist remains away from the team amid a divorce from his wife, Julianna, according to court documents.

MLB // 3 years ago
Central title is the plan as Cubs host Cardinals
CHICAGO -- The Chicago Cubs fourth straight postseason appearance has been guaranteed. Whether they finish as the National League Central Division champions, however, remains up in the air.

MLB // 3 years ago
Mets aim to slow surging Cubs
CHICAGO -- When the Chicago Cubs added Cole Hamels to their starting rotation, they didn't necessarily expect he would play such a pivotal role in helping their postseason chances.

MLB // 3 years ago
Daniel Murphy could make Chicago Cubs debut vs. Detroit Tigers
The Chicago Cubs' offense needed a boost. Adding one of the league's best left-handed bats should certainly help the cause.

MLB // 3 years ago
Cubs hope offense wakes up vs. Pirates
The Chicago Cubs have put their offensive production on repeat the past three games -- one solo homer each night in the first three games of a series against the Pittsburgh Pirates at PNC Park.

MLB // 3 years ago
Royals to celebrate 1985 with Cardinals in town
KANSAS CITY, Mo. -- The St. Louis Cardinals and Kansas City Royals will renew their interstate rivalry for a weekend series beginning Friday.

Benjamin Thomas "Ben" Zobrist (born May 26, 1981) is an American baseball player currently with Major League Baseball's Tampa Bay Rays. A switch-hitter who throws right-handed, he has exhibited a versatility to play most positions with the exception of pitcher and catcher. He has been the Rays' starting second baseman since 2009. Besides Zo, Zobi Wan Kenobi, Zoby and Benny-Zo, he is also known by the nickname Zorilla, given to him by Rays manager Joe Maddon.

Zobrist grew up in Eureka, Illinois, raised by his parents Tom and Cindi. He loved playing baseball since he was eight, so much so that he and his friends built their own wiffle ball field behind his house. After no pro scouts or college recruiters looked at him when he graduated, he thought baseball was over for him. "Baseball was not even a thought in my mind," Zobrist said, "When I was done with my last high school game, I was driving around town just thinking I'm done with baseball the rest of my life." Despite this, Zobrist's high school coach encouraged him to go the annual event that showcased seniors in Peoria, Illinois each summer. He played in the showcase, and was given an offer by Olivet Nazarene University. In his time at Olivet, he pitched and also played at shortstop and second. He transferred to Dallas Baptist University for his senior year, where he played shortstop.

Zobrist played in Wausau, WI in the Summer Collegiate Northwoods League in 2003. He was voted team MVP & led his team to the League Championship.

FULL ARTICLE AT WIKIPEDIA.ORG
This article is licensed under the GNU Free Documentation License.
It uses material from the Wikipedia article "Ben Zobrist."