The Chicago Cubs' offense needed a boost. Adding one of the league's best left-handed bats should certainly help the cause.

The Cubs acquired infielder Daniel Murphy from Washington on Tuesday for a minor leaguer, plus another player or cash considerations.

Murphy could make his Cubs debut on Wednesday night at Detroit. Chicago claimed Murphy off waivers, then worked out a deal with the Nationals.

"My biggest concern is him, how much he can endure," Cubs manager Joe Maddon said. "I want to sit down with him in the office and go over this eyeball-to-eyeball. 'I need to know what you need.' That's [what you do] when you get a veteran player this time of the year, even though he missed some of the season with an injury. You still want to know, what can you do [to help him]?"

Murphy is batting .300 with six homers and 29 RBIs in 56 games this season. He has a career .413 average in 28 regular-season games at Wrigley Field. He also destroyed Cubs pitching in the 2015 National League playoffs, clubbing four homers for the New York Mets.

"Everyone is excited to have him on our side," Cubs utility man Ben Zobrist told the Chicago Tribune.

Second baseman Javier Baez will likely slide over to play shortstop and some third base to open up playing time for Murphy.

A pair of veteran left-handers will start the second and final game of the series. The Cubs scored a single run for the fifth consecutive game while losing on Tuesday, 2-1.

Cubs ace Jon Lester (13-5, 3.72 ERA) bounced back from three poor outings to toss six scoreless innings against Pittsburgh on Thursday. He limited the Pittsburgh Pirates to five hits and didn't issue a walk while striking out eight.

In his previous three outings, Lester was rocked for a combined 17 earned runs, including six homers, in 13 2/3 innings.

"He had this way about him today that was not going to be denied," Maddon said during his postgame press conference. "That's what I saw. He was locked in, he'd had enough, and he went back to pitching like Jon's capable of pitching."

For Lester, it was just a matter of trusting his stuff and improving his location.

"Still threw my fastball, still threw my cutter," he said. "I think just better execution, better angle on both pitches."

Surprisingly, the Tigers have given Lester more trouble than any other team. He's 2-6 in 11 starts against them with a 6.05 ERA and 1.80 WHIP.

Naturally, these Tigers are much different than the ones he faced in past seasons. They are in the early stages of rebuilding.

Detroit starter Francisco Liriano (3-8, 4.72 ERA) will be seeking his first victory since April 28. Liriano has gone winless in his last 15 appearances and was charged with the loss in his last three starts.

He lasted just 1 2/3 innings against Minnesota on Thursday, surrendering eight runs (four earned) on five hits and three walks. A combination of walks and homers have ruined Liriano's season. He has issued 58 free passes and given up 16 long balls in 97 1/3 innings.

The Tigers were hoping to flip Liriano for a prospect or two after signing him as a free agent but he's been too ineffective to drum up any interest.

MLB // 2 days ago
Japan beats Team USA, advances to Olympic baseball semifinals
Aug. 2 (UPI) -- Japan edged Team USA in extra innings in a baseball quarterfinal at the 2020 Summer Games on Monday in Yokohama, Japan. The Americans must win their next game to stay in medal contention in the double-elimination format. 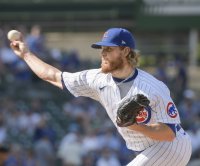