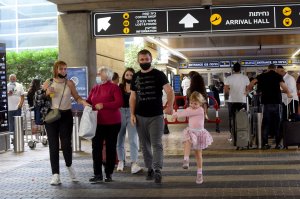 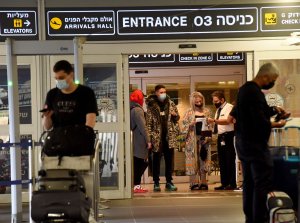 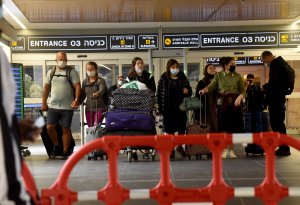 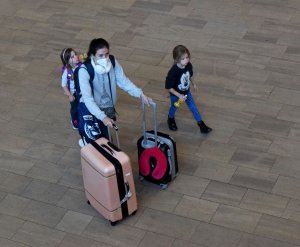 World News // 1 month ago
Israel bans travel to U.S., several other nations due to Omicron COVID-19 surges
Top Israeli government officials agreed on Monday to start banning citizens from traveling to the United States and nine other countries, beginning this week, due to the rapid growth of COVID-19 cases fueled by Omicron.

World News // 2 months ago
Australia, Israel, Thailand reopen borders to certain vaccinated travelers
Australia, Israel and Thailand all lifted COVID-19 travel restrictions on Monday for the first time in more than a year, allowing entry for passengers with proof of vaccination.

World News // 1 year ago
Record deaths, cases In Mexico strain health resources; world toll 2.1M
The coronavirus pandemic has been surging to record daily deaths and cases in Mexico, straining the resources of hospitals and morgues despite a nationwide vaccination plan.

World News // 1 year ago
WHO: New guidelines coming for nations thinking of easing restrictions
The World Health Organization on Monday urged nations to continue lockdowns and social distancing restrictions even though rates of infection have begun to level off in many parts of the world.

Odd News // 2 years ago
Stray mule wanders into airport terminal in Israel
Travelers in Israel were left scratching their heads when a mule wandered to Ben Gurion Airport and went for a walk inside the facility.

World News // 3 years ago
Israeli court orders release of U.S. student accused of boycott
Israel's high court ordered the release of a U.S. student prevented from attending college due to her alleged connection to a Palestinian movement.

David Ben-Gurion (help·info) (Hebrew: דָּוִד בֶּן-גּוּרִיּוֹן‎, born David Grün on 16 October 1886, died 1 December 1973) was the first Prime Minister of Israel and a Zionist leader. Ben-Gurion's passion for Zionism, which began early in life, culminated in his instrumental role in the founding of the state of Israel. After leading Israel to victory in the 1948 Arab-Israeli War, Ben-Gurion helped build the state institutions and oversaw the absorption of vast numbers of Jews from all over the world. Upon retiring from political life in 1970, he moved to Sde Boker, a kibbutz in the Negev desert, where he lived until his death. Posthumously, Ben-Gurion was named one of Time Magazine's 100 Most Important People of the 20th Century.

David Ben-Gurion was born in Płońsk, Congress Poland which was then part of the Russian Empire. His father, Avigdor Grün, was a lawyer and a leader in the Hovevei Zion movement. His mother, Scheindel, died when he was 11 years old.

Ben-Gurion grew up to be an ardent Zionist. As a student at the University of Warsaw, he joined the Marxist Poale Zion movement in 1904. He was arrested twice during the Russian Revolution of 1905. He immigrated to Ottoman Palestine in 1906, shocked by the pogroms and anti-Semitism of life in Eastern Europe, and became a major leader of Poale Zion with Yitzhak Ben-Zvi.

FULL ARTICLE AT WIKIPEDIA.ORG
This article is licensed under the GNU Free Documentation License.
It uses material from the Wikipedia article "Ben Gurion."