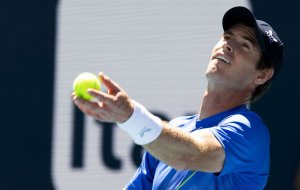 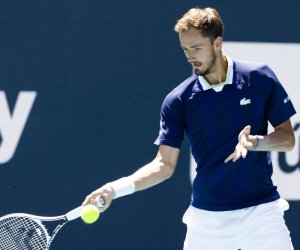 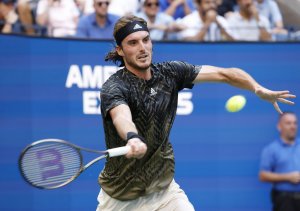 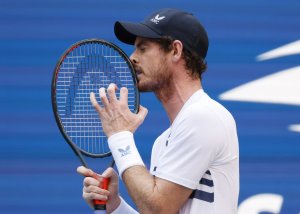 Sports News // 2 months ago
Novak Djokovic to lose top tennis ranking after Dubai loss, Grand Slam hiatus
Serbian Novak Djokovic lost to Jiri Vesely of the Czech Republic in a quarterfinal Thursday at the 2022 Dubai Tennis Championships and will lose his No. 1 world ranking when the new ATP rankings are released Monday.

Sports News // 7 months ago
Tennis star Andy Murray reunited with lost 'smelly' shoes, wedding ring
Andy Murray's online plea, calling for the return of a lost pair of 'smelly' shoes and his wedding ring, was answered by the security staff of a Southern California hotel, the tennis star said on social media.

Im happy to win and to defend my title here

I lost to Murray in the final last year, so this time I'm hoping for revenge

Andrew "Andy" Murray (born 15 May 1987) is a Scottish professional tennis player. He is currently ranked No. 4 in the world, and was ranked No. 2 from 17 to 31 August 2009. Murray achieved a top-10 ranking by the Association of Tennis Professionals for the first time on 16 April 2007. He has been runner-up in three Grand Slam finals: the 2008 US Open, the 2010 Australian Open and the 2011 Australian Open, and has reached the semi-finals of all four Grand Slam tournaments.

Murray is most proficient on a fast surface (such as hard courts), although he has worked hard since 2008 on improving his clay court game. Murray works with a team of fitness experts.

Andy Murray was born to Will and Judy in Glasgow, Scotland. His maternal grandfather, Roy Erskine, was a professional association footballer who played reserve team matches for Hibernian and in the Scottish Football League for Stirling Albion and Cowdenbeath. Murray's brother, Jamie, is also a professional tennis player, playing on the doubles circuit. Murray was born with a bipartite patella, where the kneecap remains as two separate bones instead of fusing together in early childhood. He was diagnosed at the age of 16 and had to stop playing tennis for six months. Murray is seen frequently to hold his knee due to the pain caused by the condition and has pulled out of events because of it, but manages it through a number of different approaches.

FULL ARTICLE AT WIKIPEDIA.ORG
This article is licensed under the GNU Free Documentation License.
It uses material from the Wikipedia article "Andy Murray."