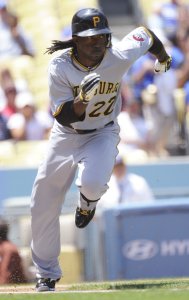 MLB // 1 year ago
Bruce Willis bounces in first pitch before Phillies game
Actor Bruce Willis watched his ceremonial first pitch 'Die Hard' in the air before it could make it to the plate prior to the Philadelphia Phillies' loss to the Milwaukee Brewers.

MLB // 1 year ago
Phillies' Bryce Harper ends homer slump with grand slam against Cardinals
Philadelphia Phillies slugger Bryce Harper broke out of a slump by going 2-for-3 and hitting a grand slam in a win against the St. Louis Cardinals. 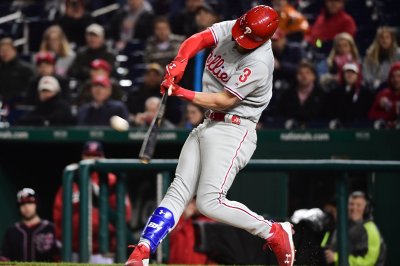 MLB // 1 year ago
Phillies' Bryce Harper hammers homer against Nationals in homecoming game
Bryce Harper began his return to Nationals Park with a strikeout, but finished with a homer in the Philadelphia Phillies' win against the Washington Nationals.

During McCutchen's senior year at Fort Meade High School in Fort Meade, Florida in 2004 he batted .474 with 8 Home runs, 40 RBI, 45 stolen bases, and only 5 strikeouts. He also played football and ran track.

McCutchen, who had signed with the University of Florida, was drafted by the Pittsburgh Pirates 11th overall in the 2005 Major League Baseball Draft and signed with the Pirates instead of going to Florida. He started for the South Atlantic League's All-Star team in 2006, his first full season as a professional. At the end of that year, the Pirates named him the organization's Minor League Player of the Year.

FULL ARTICLE AT WIKIPEDIA.ORG
This article is licensed under the GNU Free Documentation License.
It uses material from the Wikipedia article "Andrew McCutchen."
Back to Article
/