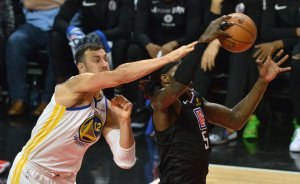 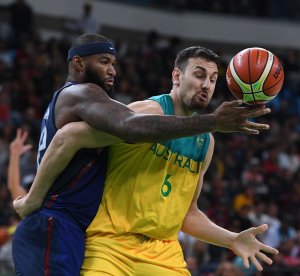 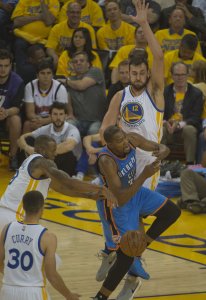 NBA // 3 years ago
Warriors' DeMarcus Cousins out again with ankle injury
The Golden State Warriors will be without their top big man, DeMarcus Cousins, tonight when they face the Timberwolves in Minnesota.

I want to extend my deepest gratitude to Coach (Ray) Giacoletti, his coaching staff, Dr. (Chris) Hill and the athletic department for everything they have done for me to help me get to this point in my life

I want to give a special thanks to all of my teammates. Without them, I would not be in the fortunate position that I am in today

Andrew Michael Bogut (born 28 November 1984) is an Australian professional basketball player. He plays for the Milwaukee Bucks of the National Basketball Association.

Bogut was born to Croatian immigrants Mišo and Ankica (née Jurišić) Bogut in Endeavour Hills, Victoria, Australia. His father is from Osijek and his mother was a native of Karlovac. Bogut grew up playing Australian rules football and tennis in addition to basketball. In his childhood, he patterned his basketball game after Toni Kukoc. As a 15-year-old, he was cut from the Victoria junior state representative team. That experience apparently drove him to improve; he later went on to attend the Australian Institute of Sport, with whom he would tour the United States in 2001 and 2002. In his last season at AIS, he averaged 29 points, 14.5 rebounds and 2.7 blocks per game while competing in the SEABL. He went on to lead the Australian team that won the 2003 FIBA Junior World Championships, and was named the tournament MVP.

FULL ARTICLE AT WIKIPEDIA.ORG
This article is licensed under the GNU Free Documentation License.
It uses material from the Wikipedia article "Andrew Bogut."